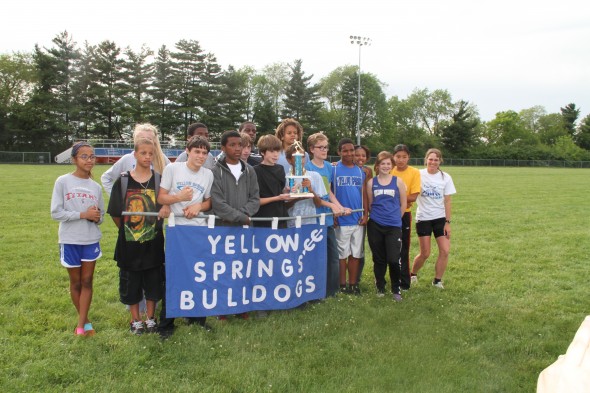 Just a few weeks ago the boys placed runner up at the McKinney invitational behind Emanuel Christian. Yesterday afternoon, the duel between the two strongest teams in the Metro Buckeye Conference was reborn during the MBC league meet here in Yellow Springs and the outcome was different as the Boys team won the Conference title and the Junior High girls team placed 3rd. Coach Isabelle Dierauer said, today everyone fought with Bulldog pride and gave their very best fighting for every point, we are very proud of our teams.

Earlier in the season Oluka Okia broke the Pole Vault record, yesterday he placed himself a second time into the records book by tying the high jump record of AJ Wagner with a jump of 5-04 winning the competition. Kaner Buttler crossed 4-10 and placed 4th. Okia also won the Pole Vault with a height of 7-6 before his team mate Gabe Triliana with a jump of 6-0. Okia then went on and placed 3rd in the Long Jump with a leap of 15-05.

In general, the Yellow Springs jump team did well, Kaliyah Fulton crossed 5-0 and placed 2nd in the Pole Vault and got 4th with a height of 3-10 in the high jump. Rhona Marion placed 3rd in the girls’ long jump with a jump of 13-03.

The throwers delivered as well, Joe Plumer had an awesome day despite is injured foot, he threw the discuss 90-01 and improved his personal best in the shot put by 3 feet throwing 35-02 winning both events. However the big surprise of the day was Dee Johnson, he placed 6th in the shot with 22-08 and 4th in the discuss with a toss of 76-05.

Sure the McKinney hurdle crew wanted to add some points to the team success as well. In the 200m girls hurdle race once more Julian Roberts and Olivia Brintlinger-Conn were running together in the fast heat, Roberts placed 2nd in 33.10 and Brintlinger placed 3rd in 33.22. Duard Headly placed 4th in 33.81 in the boys race. In the boys 110m hurdle race Kaner Butler placed 3rd in 19.59. Rhona Marion got 3rd over 100m hurdles in 19.75 and Olivia Brintlinger-Conn placed 4th in 20.00.