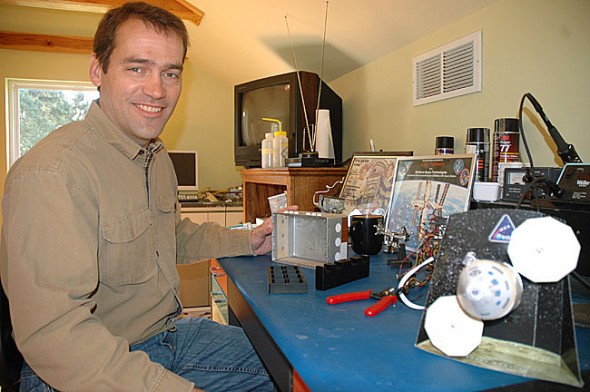 From his home office on Allen Street, local aerospace engineer Jake Freeman designs the instruments for life science experiments in outer space. In his work for BioServe, Freeman, a Yellow Springs High School graduate, has contributed to experiments that have led to new antibiotics and vaccines and added to an understanding of plant and animal behavior. Here Freeman tinkers with a container used in testing the behavior of Monarch buttlerflies in space. (Photo by Megan Bachman)

The village’s own Rocket Man

Jake Freeman’s work is not rocket science — but it comes pretty close. The local aerospace engineer designs experiments to work in microgravity some 200 miles above the Earth and, since space flights are rare and expensive, there is little room for error.

“It’s very high stakes — you only get one shot,” Freeman said in an interview last week from his home office on Allen Street.

Freeman, a 1989 Yellow Springs High School graduate, designs the instruments for life science experiments that have taken place on space shuttles, rockets, the International Space Station, the Mir Space Station and other spacecraft. Over the last 15 years these experiments have led to the development of antibiotics and vaccines and added to an understanding of plant and animal behavior, he said. And for his latest project he is working with high school students whose space experiments on anti-fungal drugs and jumping spiders won a global competition sponsored by YouTube.

Freeman telecommutes daily from Yellow Springs to BioServe Space Technologies at the University of Colorado, where he has worked since 1998. He said the job has been challenging, since “failures are magnified,” but that he has appreciated the creativity involved and the chance to collaborate with scientists from around the world.

“It’s an odd niche for an engineer,” Freeman said.

In light of recent changes to the National Aeronautics and Space Administration’s budget, the future of space research is unclear. Freeman, however, sees value in outer space experiments for their down-to-earth applications, and to advance scientific knowledge.

For example, anti-osteoporosis drugs that resulted from research Freeman worked on are now in clinical trials and a salmonella vaccine for which he helped design experiment hardware may be within reach.

“It speaks to the value of knowledge,” Freeman said of drug development. In another case, he worked with a forest industry consortium to figure out if the group can grow trees with less lignan so fewer chemicals are needed to make paper.

Pure research, on the other hand, is more like “standing on the shoulders of giants,” he said. One recent example is an experiment on what spider webs look like in space — “pretty much the same,” Freeman said.

Space offers a unique laboratory environment because of the lack of gravity, Freeman said. Bacteria tends to be more virulent and to create more antibiotics. Plants produce less lignan. Muscles and bone deteriorate faster. All of these differences lead to research opportunities that could benefit companies and humankind.

BioServe was founded in the late 1980s as one of 15 national NASA research centers tasked with making commercial space flight a reality. By seeing the benefits of space research, companies would someday cover the costs of NASA flights, the rationale went. But in 2004, the program was cut as the George W. Bush Administration made sweeping changes to NASA’s mission.

Bush canceled the space shuttle program and re-focused NASA on returning to the moon and, eventually, a manned flight to Mars. Research that did not advance human spaceflight was slashed in favor of studying how humans could survive long periods of time in space. The goal was to spark public enthusiasm for space exploration after the 2003 Columbia shuttle disaster.

Freeman said that Bush didn’t see much value in research — he wanted to inspire Americans around space exploration. According to one MIT aerospace engineer, life science research funding at NASA was cut by 90 percent. Today BioServe is now one of just two remaining Commercial Research Centers and the only one doing life science research. About 70 percent of its funding currently comes from the U.S. government.

Since the space shuttle program ended, BioServe’s clients send their experiments aboard manned spacecraft such as the Russian Soyuz or on unmanned rockets en route to the International Space Station, where astronauts perform them. Such unmanned capsules are like “a flying closet for cargo” and are a more effective way to carry out space research, Freeman said.

Even still, “the shuttles have a sentimental value,” Freeman said.

Freeman himself has never been in space, nor does he wish to be. Instead, he has relished the design challenges on the ground — making the research equipment small, light, low power and reliable. In other words, “it has to work,” he said.

Freeman, the son of Geoff and Sue Freeman, said he always loved math and science, attending many “Geek Camps” as a kid. From age 14 he worked construction with local builder Bruce Parker. By the time he entered Yellow Springs High School, he knew he would become an engineer, he said.

“I could see the link between building homes and building as an engineer,” Freeman said. There’s the satisfaction of starting from an idea and ending up with a finished product and, in Freeman’s words, “finding the best way to do something.”

Freeman finished high school math as a sophomore, then took calculus at Antioch College. He said he was grateful that YSHS gave him such flexibility. Of all his Yellow Springs teachers, Freeman was most influenced by Mills Lawn School and Morgan Middle School science teacher John Roby because of his “insistence on excellence.”

Freeman went to Purdue University, where he double-majored in mechanical engineering and communication, pursuing the latter so that he could more clearly convey his ideas (poor communication skills is a common problem among engineering types). Freeman finished his undergraduate degree at the University of Colorado and briefly participated in robotics competitions before starting grad school at CU, where he began work for BioServe.

Since then, Freeman has co-authored nearly a dozen papers on what has been learned in space experiments, including such publications as, “Haploid deletion strains of Saccharomyces cerevisiae that determine survival during space flight” and “Antibiotic production in space using an automated fed-bioreactor system.”

In 2008 Freeman returned to Yellow Springs with his wife, Nicole, and their sons — Pete, Joe and Cal — to be closer to family and to raise their children in a “liberal-minded small town with good schools,” Freeman said. BioServe and Nicole’s employer, a Fortune-200 company, agreed the couple could work remotely. Now they work back-to-back in their home office.

The move has worked out well for the Freemans. Between creating prototypes in his workshop, modeling with CAD, designing software and managing international projects, Jake Freeman can ride down to the Community Children’s Center to pick up his children. And because Freeman’s colleagues work on Mountain Time, he finds time in the mornings to volunteer at Mills Lawn.

In his other work with youth, Freeman designed the equipment for the YouTube Space Lab project. Last month three high school students were selected for the project to send their science experiment into space and Freeman is helping to make sure their experiments work.

“Space is a great way to inspire kids to math and science,” Freeman said of YouTube Space Lab.

Though Freeman’s work travels on rockets, is highly complex and must perform in the unique environment of outer space, he insists he is no rocket scientist.