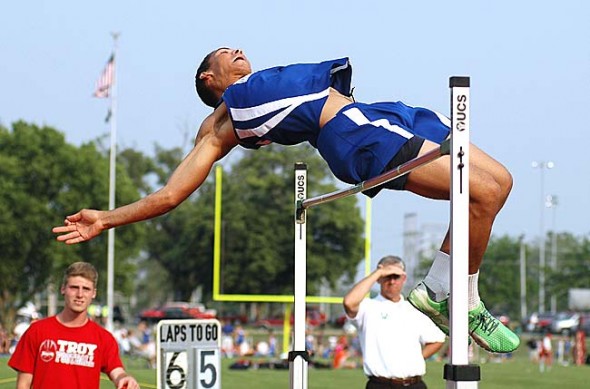 Last weekend Antone Truss became the first YSHS high jumper to qualify for the Ohio High School Division III Track & Field Championships in more than 25 years. The senior seemingly defied gravity during the regional meet as he cleared 6’2’’ to secure his position at states and then conquered heights up to 6’6’’ to finish as the regional runner-up. (Photo by Megan Bachman)

YSHS athlete jumps up to state

Truss cleared 6’5″ to finish as the runner-up at the Ohio High School Track & Field Regional Tournament on Friday, securing his spot at this week’s state finals. He’s the fifth high jumper in school history to compete at states.

“This is the biggest week of my life so far,” Truss said, with YSHS graduation on Thursday and the state high jump competition on Friday. While he was pleased with his regional performance, “I’m going to be way better at state,” he said.

Truss’ early jumps at regionals seemed effortless, his approach clinical, and he made quick work of the lower heights. The pressure mounted when the bar was set to 6’2″ with six jumpers remaining, only four of whom would qualify for state. Truss easily cleared 6’2″, then, when two contenders missed their third and final attempts at 6’2’’, Truss broke into a smile as he realized he would be making the trip to Columbus for the Division III finals.

“I was actually pretty nervous about how well I was going to perform,” Truss said. “After I got to the top four my nerves went away. I was just jumping.”

But Truss had more work to do. The Dayton District high jump champion had his sights set on a regional title as well. Truss cruised over 6’3″’, 6’4″ and 6’5″’ until there were just Truss and another high jumper remaining. When neither could clear the 6’6″ mark, the championship came down to total misses, and Truss narrowly lost out, but still qualified for state.

“When it was down to just us two it was just a friendly competition,” Truss said. “I was pressuring myself to make that height, and on my last jump, I kind of slipped. It happens, and I still have state to do better.”

“[Coach Dierauer] was telling me to calm down and not be so nervous and telling me what to do as far as my run up went,” Truss said. Dierauer has coached Truss since eighth grade, when Dierauer asked him to fill in at high jump.

En route to a league championship last month, Truss sailed over 6’7″, his highest mark ever. With the jump, Truss set a new Metro Buckeye Conference record and tied a YSHS school record set by Steve Nelson in 1977 and matched by Aaron Lucas in 1991. Truss hopes to reach heights of 6’8″ or 6’9″’ at states.

“To get up to 6’7″ just took a routine and it was good I got a good night’s rest,” Truss said. “I was just in a mode, I didn’t worry about anything else except the high jump.”

Truss also competed in the long jump at regionals, finishing in seventh place with a leap of 20’6″. The previous week, he became the first YSHS athlete to win the district title in both the high jump and long jump.

Truss said qualifying for states is definitely the peak of his athletic career so far, a career that will continue next year at Wilmington College. Going into such an important week, Truss said he is trying to stay relaxed.

“I feel confident,” Truss said. “I’m a little nervous but I’m just going to try to push the nerves to the side and do the best I can.”