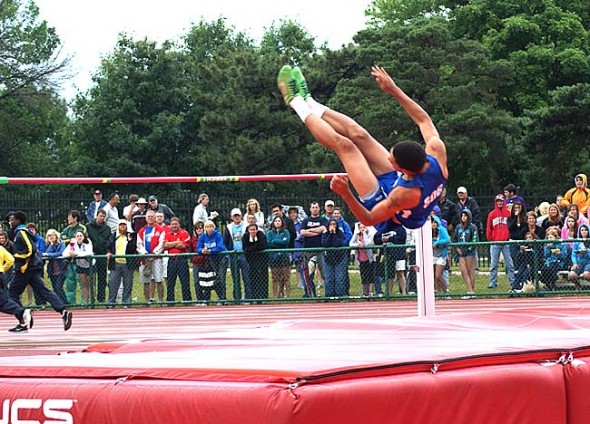 YSHS senior Antone Truss launched himself over the bar during the high jump at the state finals last week. Truss jumped 6'0" to come in sixth place, the best finish of a YSHS high jumper in more than 40 years. (Submitted photo by Keturah Fulton)

Truss soars to sixth at states

On a rainy day in Columbus on Friday, Yellow Springs High School senior Antone Truss became the first high school high jumper to place at the state meet in more than 40 years.

Truss came in sixth place out of 16 competitors at the Division III state finals, ending an accomplished YSHS track career in which he tied for the school record and a set a new league record at the Metro Buckeye Conference finals with a leap of 6’7″. Next year Truss will join the Wilmington College track and field team.

At states, Truss was able to muster a 6’0″ jump despite a slippery surface. All the competitors had trouble adjusting to the conditions, and the state champion only cleared 6’4″ to win the title. By comparison, Truss jumped 6’6″ in the regional meet the previous week.

According to boys track coach John Gudgel, no high jumper since Richard Benning, in 1968, has placed at the state meet.