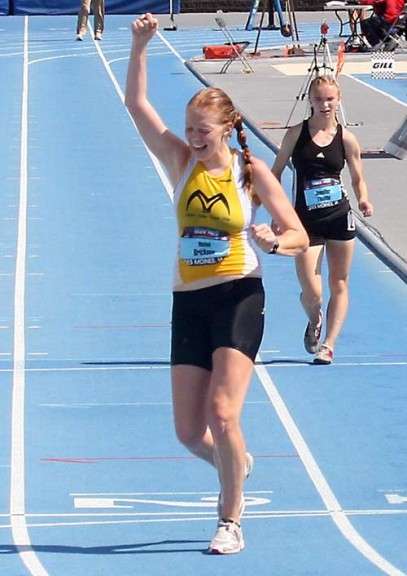 2010 YSHS graduate and Lindsey Wilson College student Reini Brickson recently earned a spot on the Capital One Academic All-District Women’s Track/Cross Country Team, selected by the College Sports Information Directors of America. The team recognizes the nation’s top student-athletes for their combined performances athletically and in the classroom.

To be eligible for consideration, a student-athlete must be a varsity performer, maintain a cumulative GPA of 3.30 on a scale of 4.00, have reached sophomore athletic and academic standings at the current institution and be nominated by their sports information director.

Brickson earned NAIA All-American honors for her performance in race-walking at the national championships in May. The sophomore earned her spot on the academic all-district team with a 3.70 GPA as a social science education major.

According to Miami Valley Track Club coach Vince Peters, Reini is one of three YSHS graduates who earned NAIA All-American honors in track this year.  The others were Mitchell Brickson, Reini’s brother, and Jacob GunderKline, both of Goshen College.  Reini took third place in the 5,000 meter race walk for women at the NAIA National Track and Field Championships.

Said Peters, “All the times were well off the athletes’ personal and season bests due to the temperature,” which Peters reported was “well above 90 degrees at the 1:40 p.m. start time for the race.”

Jacob and Reini will help coach the Miami Valley Track club’s younger athletes this summer. On Sunday, June 17, Mitchell will compete in the USATF Junior National Track and Field Championships in Bloomington, Ind, where he will vie for a spot on the USA junior team headed to Barcelona, Spain, for the IAAF World Junior Track and Field Championships.