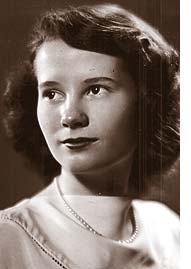 Anne “Mitzi” Wilson Wheeler, age 83, died at her home in Bridgewater, Mass., on July 14. After several months of illness, attended continuously and alternatively by her three children Scott, David, and Liz, she died of pancreatic cancer, fortunately never having experienced any pain.

Born December 15, 1928, in Cleveland to Katherine Boone Wilson and Samuel Alexander Wilson I, she graduated from Shaw High School in East Cleveland in 1947 and from Antioch College in 1952 with a bachelor’s in chemistry. On June 25, 1949, she married Carlton E. Wheeler of Elmira, N.Y. in Yellow Springs. From 1958–1966, she lived in Yauco and Ensenada, Puerto Rico, where she and her husband established a plastics manufacturing company and raised their three children. She moved with her family to Bridgewater, Mass. in 1966. She enjoyed a fulfilling and challenging academic career administrating course work in the chemistry department at Bridgewater State College, and took advantage of continuing education courses in physics and other subjects until retiring in 1996.

Mitzi will be especially remembered for her cheerful, bright personality, her wide-ranging intellectual interests in history, science, literature, the arts and her generous spirit. She was an accomplished cook and avid gardener who delighted family and friends with her sumptuous meals and celebrations. She was a serious connoisseur of animation art, comic book art and ancient coins, and shared these interests with her friend and neighbor, Dr. Richard Calusdian.

Memorial services will be held in Perrysburg in September at the home of Mitzi’s niece, Robin Stranahan. Burial will be at Hale Cemetery in Mount Victory next to her beloved mother, Katherine Boone Morton. Relatives and friends are welcome at Mitzi’s home at 58 Fiske Drive, Bridgewater, Mass. on Saturday, July 21 at 2 p.m. for a reception in her honor.

Memorial contributions are welcome at the Hospice of Greater Boston and Brockton, 1324 Belmont St., Suite 202, Brockton, Mass. or online at http://www.hospiceboston-brockton.com.

The following people have also been especially caring and supportive to Mitzi: Richard and Linda Calusidian, the Nelson family, the Pierce family and the Donnelly family. The family is grateful to Hospice of Greater Boston and Brockton and the Visiting Angels for their help and support.