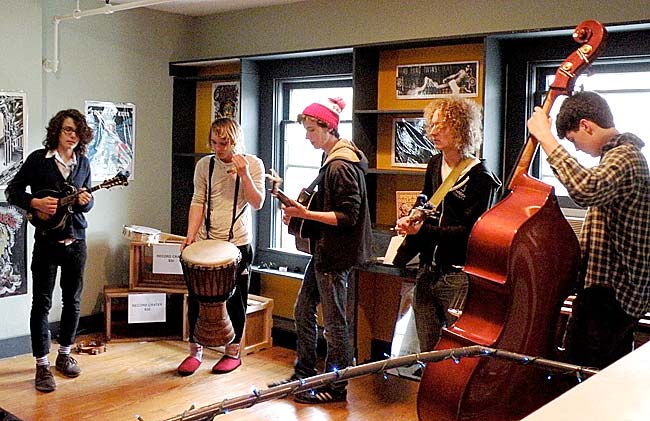 For most of the rock ‘n’ roll era, bands delivered their new music as singles on seven-inch vinyl records. One Yellow Springs band is now reviving the analog record in defiance of today’s standard format of digital MP3s. The same turntables that in 1967 spun the Beatles’ Yellow Submarine/Eleanor Rigby single at 45 rotations per minute can now spin a special release from the local band Wheels — Morse Code/So Fast — only available in wax pressing.

Wheels, a group of local teens with an album behind them and a dose of Dayton-area fame to boot, looks forward to their next full-length release this fall, and at the same time looks back to a format that adds a unique sound to their music.

“That warm, retro feel [of vinyl] suits us pretty well,” said guitarist Rory Papania. Wheels is adept at blending old and new, their sound a melding of old-style folk and bluegrass with a progressive sound and pop harmonies.

“The whole purpose in opening up the record store and the label is to get music out to people,” Castleberry said. Seven-inch records in particular “leave you wanting more” and are a great for selling at live shows, Castleberry said.

Vinyl, however, is not a money-maker for bands, Castleberry said. The real benefit is better sound. Though Castleberry said he didn’t know how Wheels would sound on vinyl, he was impressed with the final product.

“Acoustic stuff and voices come across very well,” Castleberry said. “And Wheels is known for their harmonies.”

For Papania, vinyl is a more collectible format and a “physical representation of the music.”

“You get the blips and the pops,” Papania said. “If you put your ear really close you can hear it.”

The A-side, “Morse Code,” was written by percussionist and harmonica player Jaime Scott and in mandolinist Sam Salazar’s words, “has this lonesome old-timey sound with a progressive feel.” The B-side, written by Salazar, is a harmony-rich emotional ballad. Both sound powerful on vinyl, Salazar said.

“Vinyl adds something special to every song,” Salazar said. “I think it captures the subtle complexity of our music so well.”

Wheels members are also proud that the release was an all-local production. The tracks were recorded at SoundSpace Studios with Chris Hertzler, Pierre Nagley created the album artwork, and Toxic Beauty released the album. Only the act of pressing was done outside of Yellow Springs, though it was produced not all that far away in Cleveland.

After selling 1,000 copies of their 2011 debut album “Fields on Fire” and often playing two to three shows per weekend, Wheels has slowed down in recent months and returned to the studio to work on its second full-length album, “Big Feeling.” Band members used Kickstarter to raise the $6,000 for the album, and have cloistered themselves in the physical plant office on the Antioch campus over the last few months to self-produce the record. The result finds the band evolving, Salazar said.