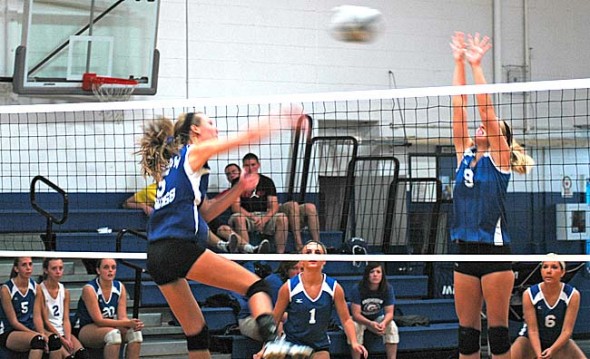 Senior Emma Peifer slammed an ace at the Greenon side during the Yellow Springs High School girls varsity volleyball team’s 25–18, 25–18 stomping of the visitors. The Lady Bulldogs started their season 3–0. (photo by Megan Bachman)

Boys soccer starts 3–0
The Yellow Springs High School boys varsity soccer kicked off their season with three straight victories — over Greenon, Springfield-Shawnee and Cincinnati Hills Christian. The 3–0 season start is the first in while, according to Coach Ben Van Ausdal, who has high hopes for his team.

“I think we’re going to be pretty tough,” Coach Van Ausdal said. “We’ve got some pretty good talent, young talent and upperclassman who are stepping up.”

Despite graduating several key team members, including Jacob Trumbull, who scored 35 goals last season, other Bulldogs are quickly filling their spots, Van Ausdal said.
Against Greenon, Ian Chick scored the game’s only goal to give the Bulldog’s a 1–0 advantage. Versus Springfield-Shawnee, YSHS dominated, coming out with a 4–1 victory. Jared Scarfpin had two goals and one assist on the night, while Grant Reigelsperger and Chick each added a goal.

On Saturday night at regional powerhouse Cincinnati Hills Christian, the Bulldogs fell behind 1–0 at the half. But Scarfpin equalized on a penalty kick. And Chick found the goal with just five minutes left when his corner kick deflected off their goalie.

“The whole team came together and pushed for a win when it was needed,” Coach Lindsay Kerns said of the victories. It was the first time in years that YSHS has swept the quad meet, which is held at the start of each season.

At Xenia High School on Monday, the Bulldogs triumphed in straight sets once again (25–16, 26–24, 25–17). In the match senior Angela Allen shined, serving 17 points for the team. She was consistent and smart with the placement of the ball, which helped keep control on the Bulldogs side of the net, according to Coach Kerns. Junior Kennedy Harshaw led the team in kills (9) with the help of junior Hannah Brown achieving 14 assists. Maya Hardman’s hard swings and Emma Peifer’s aggressive serving came at the perfect time to put the ball away. Unfortunately on the same night, the JV team lost to Xenia 25–19, 25–11.

After going .500 last year (11–11, 4–8), the varsity volleyball team has a Metro Buckeye Conference championship in their sights. Read more from Coach Kerns and see photos from the match at ysnews.com.

Gravley-Novello leads team
Sophomore Connor Gravley-Novello led the YSHS boys cross country team to the finish line in the team’s first meet of the year, the Bob Shul Invitational in West Milton. Connor’s final time of 19:40 is a new lifetime best. He averaged 6:21 per mile in placing 87th out of 245 runners.
Teammate Taylor Ford ran in second position for the Bulldogs, Josh Seitz was a strong third with Gabe Trilliani, Oluka Okia and Dave Butcher rounded out the very inexperienced squad, which only has two returning runners.

“The team is definitely young this year,” Coach Vince Peters said. “But this squad will be better than last year’s long before the season’s end. They have the building blocks — raw talent and a desire to excel.”

Seitz came close to his freshman best of 22:27 during the race, while the rest of the team’s runners established starting points for the season as they work on individual record breaking.
Overall, the boy’s team placed 23rd out of 27 schools competing, just behind YSHS’s main rival, Xenia Christian, which Peters said he hopes to best this year.

Brown, Miller co-captain team
Not only are YSHS girls cross country runners Alex Brown and Lois Miller this year’s co-captains, the duo ran together in the lead pack much of the race at the Bob Shul Invitational on Saturday.

After a 6:17 first mile, Brown pulled ahead to finish just off her 2011 best time in 21:22, good for 15th place out of 198 runners. Miller came in 29th overall, Niki Worsham, in her first ever cross country race, finished 121st, Christina Brewer came in 145th and Annidee Pettiford rounded out the team’s efforts in 175th. Overall the Bulldogs placed ninth out of 24 schools. With several meet competitors among the best in the state, the girls high finish is a sign of good things to come, according to Coach Vince Peters.

“For our ladies this meet was a good preview of what to expect come tournament time,” Coach Peters said, who expects several runners to improve their time by minutes by next weekend’s meet.

McKinney runners take off
While the McKinney boys cross-country team is missing the talents of CJ Johnson, seventh-grader Christian Elum stepped up at Saturday’s meet. He combined with the squad’s four eighth-grade boys to post a score of 362 points, good for a 15th place finish out of 34 schools.

Leading the Bulldogs was experienced returnee Hayden Orme, who placed 29th overall in 12:57. Newcomer Cameron Haught showed that he has potential, placing 40th in 13:10. Levi Brown, was the team’s third runner as he placed 78th out of the 251 finishers in 14:02. Kenny McKinney finished 100th in 14:22. Elum placed 194th overall in 16:32. And rounding out the boys team were Kaden Boutis and Nathan Davis.

On the women’s side eighth-grader Olivia Brintlinger-Conn marked her debut as a cross-country runner. As a first-time cross-country runner she demonstrated remarkable skills, completing the two-mile course in 15:48 — good for 70th out of 226 runners.
McKinney vball looks to repeat

After coming off an undefeated season last year, the eighth-grade volleyball team has all thirteen returning players from the seventh-grade squad (Allison Bothwell, Lorien Chavez, Olivia Chick, Maya Creighton, Amelia Gray, Danielle Horton, Kasey Linkhart, Julian Roberts, Aliza Skinner, Elizabeth Smith, Gracie Wilke, Annabel Welsh, and Danielle Worsham) and the has added one new player, Kaliyah Fulton. Over the summer, many of these girls worked to improve their skills by attending volleyball camps and open gyms with the high school players, according to Coach Chris Linkhart.

“As their coach, I can say these girls work very hard to learn all they can about the game of volleyball,” Coach Linkhart said. “They are very competitive and are determined to produce a season just as good as we had last year.”

With new coach Bubba Worsham and a team comprised of 16 players, the seventh-grade team has the potential to produce a winning season as well. The players are very athletic and are learning the game quickly, according to Coach Linkhart. With the tremendous improvement these players have shown in just a few weeks, their season promises to also be a winning one.
Members of the seventh-grade team are: Elle Comerford, Nia Stewart, Evalynn Orme, Reese Elam, Aza Hurwitz, Greta Kremer, Jasmine Davidson, Ellyson Kumbusky, Raven James, Elle Peifer, Kennedy Young, Brielle Willis, Skyler Miller, Amani Wagner, Kallyn Buckenmyer and Deaunna Cheatom. 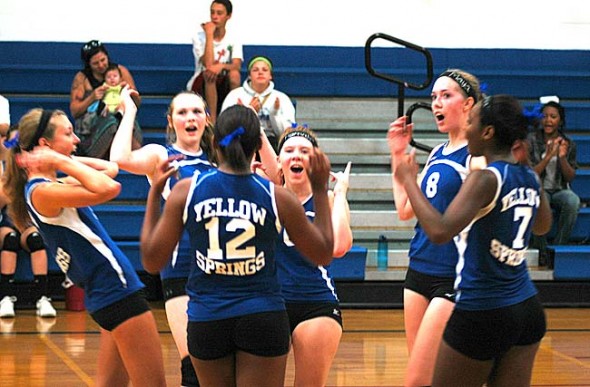 Members of the Yellow Springs High School girls varsity volleyball team celebrated after winning a point during a comeback victory over visiting Greenon in straight sets. The Lady Bulldogs started their season 3–0. (photo by Megan Bachman)