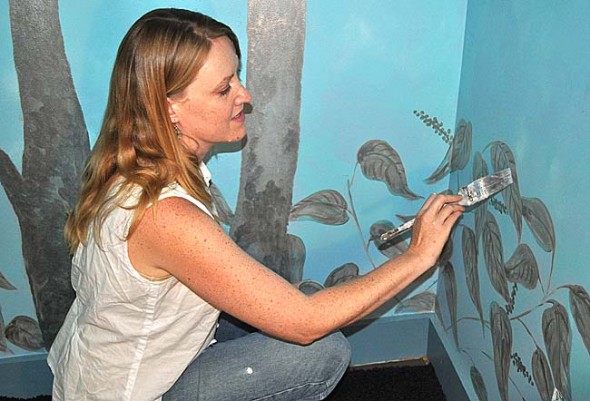 Tia Acheson, who grew up in Yellow Springs and then moved to Washington state with her family, has returned to the village with her son, Luca. An artist, she works as a professional painter, and specializes in creating murals. (photo by Sarah Siff)

Aside from the magnetic pull that Yellow Springs seems to exert over artists, painter Tia Acheson felt another element drawing her toward her childhood home. The village native, 41, wanted her son, Luca, 5, to attend the Antioch School where she herself had learned to create.
“It’s really just a place where kids can be kids,” she said of the alternative school that emphasizes child-centered learning.

When she was 11 years old, Acheson and her family moved from Yellow Springs to Whidbey Island, an artists’ colony 30 miles north of Seattle. She returned here two years ago when she sensed that the education Luca was receiving in traditional pre-school might not suit him.
Since then, she too has branched out — as an artist, recently completing a mural in the back room of the Spirited Goat Coffeeshop. The room now sports a cool-toned tropical scene meant to depict the splendor of shade-grown coffee. Birds adorn the trees and coffee plants thrive on the rainforest floor.

She said the treetop view from her second-story porch inspired the painting. She contracted with coffee shop owner Michael Herington to create the scene when he noticed her paint-splattered clothing. She proposed the mural and sketched up her idea before painting it freehand.

Acheson has also completed work for the Arthur Morgan House — an exterior trompe l’oeil of a window — and is working on painting the weight room at Warner Middle School in Xenia with the school’s mascot.

Acheson is a house painter in the traditional sense, but her true love is decorative painting. Although building her business has been a struggle, she believes that Yellow Springs is the place where her brand of art can thrive.

“It’s really for homeowners who want something creative, something a little more interesting than a flat wall,” she said.

Since she was a child, Acheson wanted to be an artist.

“At Antioch, the teachers trust that kids will learn what they need to learn,” she said, as opposed to a public education where teachers are concerned with particular benchmarks. For example, her son’s pre-school instructor worried when Luca showed no interest in coloring.
When her family arrived in Washington State, her parents continued her and her siblings’ education at home. “It was the same principle, a trust that we would learn what we needed to learn,” she recalled.

Of course, she said, that was easier to see in her brother’s experience, since he was interested in math and became a computer scientist. “With artists, it’s harder to know what you actually need to learn,” she said.

As a young adult, Acheson attended art school in Seattle.

There, she met Robert Massa, an artisan who builds contemporary grandfather clocks. Acheson became a production painter of the colorful timepieces, building her furniture-painting chops and exploring bold hues and patterns.

Acheson strongly felt that Yellow Springs would be an excellent community in which to both grow her painting business and allow her son to explore a non-traditional education. She said returning to Yellow Springs for the Antioch School experience seems to be a trend.

“Several of the parents I’ve met also attended the school, moved away, then came back here so their kids could go to the school,” she said.