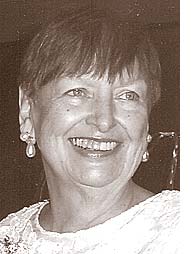 Barbara was born Jan. 16, 1937, in Mercer County, Ohio, the daughter of the late Lowell and Ruth (Hatfield) Witter. She was employed as a teacher with Fairborn City schools, retiring after over 30 years of service. A very generous and caring woman, she opened her home to many throughout the years, and she volunteered for more than 30 years with Terrific Women in Giving, or TWIGs, the auxiliary of Dayton Children’s Medical Center.

In addition to her parents, Barbara was preceded in death by an infant son, Christopher, and a son-in-law, Rick Godwin. She is survived by her husband of 51 years, Jerry; her loving dog, Pepper; her three children, David Henry (Cathy) Knoth of Springboro, Timothy Lowell (Jennifer) Knoth of Springboro and Heather Leigh Knoth of Yellow Springs; her four grandchildren, Tyler, Emily, Taylor and Benjamin; her two brothers, William (Glenna) Witter of Va. and Don (Carol) Witter of Fla.; her two sisters, Karen (Terry) Hutton of Mo. and Sharon (Jim) Walls of London, Ohio; her two brothers-in-law, Jim (Nancy) Knoth of Brookville, Ohio and John (B.J.) Knoth of W.Va.; her two sisters-in-law, Janet Turner of Russells Point, Ohio and Jane (Jerry) Rutledge of Celina,Ohio; friend of the family, Kathy Eubanks of Chilo, Ohio and numerous nieces, nephews, other extended family and many friends.

Interment was held Friday, Sept. 15, in the St. Elizabeth Cemetery in Coldwater, Ohio. In lieu of flowers, the family requests memorial contributions be made to Dayton Children’s Medical Center. Condolences may be made to the family at http://www.beltonstroup.com.