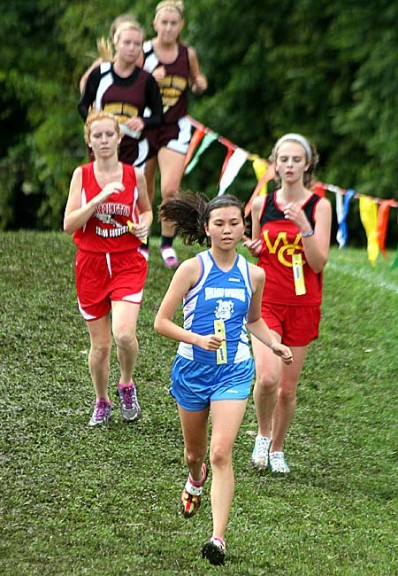 Miller sets record at Fairborn
In taking on the Dayton-Springfield area “behemoths,” the Yellow Springs High School girls cross-country team did something that the other sports teams at YSHS rarely attempt, according to Coach Vince Peters. And the Bulldogs came out in third place out of 16 schools to improve their record to 20–13 on the year on a record-setting run by senior Lois Miller.

“The big blue and white calmly walked to the starting line surrounded by large division I powerhouses like Fairborn, Xenia, Beavercreek, Bellbrook, Sidney and Wilmington,” Coach Peters said. “Then our women’s cross-country team promptly bared their spikes and showed the lasses their heels.”

Led by team co-captains Miller and Alex Brown, the Bulldogs went immediately to the front of the pack. Miller opened up a small gap going into the hilly section of the course, but the Bulldogs were prepared for the climb. Brown and Charlotte Walkey settled comfortably into the chase pack in the fifth and sixth positions.

Miller cruised in to a new meet record and season best time of 20:56. Brown took seventh in 22:25, and freshman Charlotte Walkey finished 10th with a personal record time of 22:42.

Volleyball moves to 7–3
Going into the week the YSHS girls volleyball team was undefeated at 5–0 but faced tough competition. With two wins and three losses in action this week, the Lady Bulldogs move to 7–3 on the season (2–1 in the Metro Buckeye Conference).

At the Miamisburg Invitational on Saturday, YSHS won one of three matches, losing to Tipp City (25–12, 25–7) and Tri-County (25–13, 25–21) before beating Belmont (25–14, 25–9). On senior night at home the Lady Bulldogs came out the better side of a grueling five-set match thanks to the leadership of the team’s seniors.

Girls soccer loses to Crusaders
The YSHS girls soccer team faced a tough Dayton Christian team last Thursday at home and came out on the losing side. They are now 0–4 for the season. With the Dayton Christian Crusaders ahead by two, the Lady Bulldog offense countered with repeated runs into Crusader territory by sophmore Kara Edwards, freshman Ayeshia Allison, and senior Paloma Wiggins but were thwarted by Dayton’s defense.

During the second half the YSHS defense of senior Keturah Fulton and freshmen Ursula Kremer and Alice Miller continued their success in denying crosses and frustrating forwards. Midfielders Izzy Long, Ashley Longshaw and Lucy Callahan supported the defensive efforts and forced Dayton Christian to take shots from the outside.

At a tri-meet last Thursday, the Bulldogs placed third with 213 total strokes. Rachele Orme led her team over the nine holes with a 48, Liam Weigand wasn’t far behind with a 50 and Morgan Beard (56), Taylor Beck (59), Kyle McAnerney (64) and Aaron Harshaw (67) rounded out scoring.

At the Dave Christoff Invitational, an 18-hole tournament with 24 area teams, Orme dropped her score to an 88. After an improved 45 on the front nine, Orme scored a 43 on the back, just seven over par. She finished tied for 49th out of 115 golfers. Weigand scored a 104, including two pars, good for 97th place. Beck (123) and Harshaw (128) also finished their rounds.

Boys XC runs to eighth
Connor Gravley-Novello led the Bulldogs across the finish line for the third straight time in this young season. And he broke the 20-minute barrier for the second time while placing 44th of 192 runners in 19:52.

Overall, the Bulldogs placed 14th out of the 17 schools competing in the men’s race with 386 points.

McKinney volleyball now 3–1
The McKinney eighth-grade volleyball team looked to extend an undefeated 9–0 record that began last year when its players were in seventh grade at a home quad meet on Saturday.

The McKinney girls narrowly escaped Xenia Christian and pulled out a two set win over a tough Troy Christian squad. But late in the day they faced Middletown Christian and lost in three sets to go 3–1 for the season. Against Xenia Kasey Linkhart dominated with 17 points, five aces and six assists. 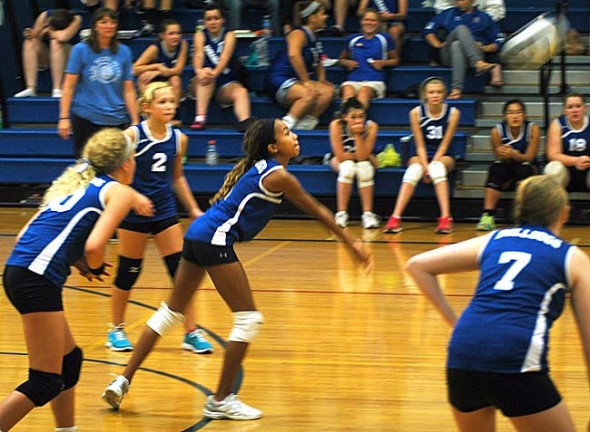 Julian Roberts took a dig for the McKinney eighth-grade girls volleyball team at its quad meet on Saturday. During the win against Troy Christian, Roberts had eight points, seven assists, four kills and three aces. (Photo by Megan Bachman)