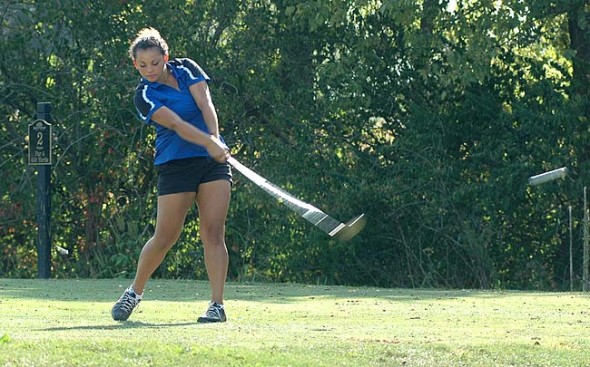 Golf team tees off
In its second round of golf this season, the Yellow Springs High School co-ed golf team took on three visiting conference teams at its home course last week.

Junior Rachele Orme once again showed her combination of accuracy, consistency and power in leading the Bulldogs with a score of 42 over nine holes, her best of the year. Returning sophomore Liam Weigand improved over the previous week with a 48. Sophomore Morgan Beard and junior Taylor Beck, also returning to the squad, posted scores of 57 and 60, respectively. And newcomers Aaron Harshaw and Kyle McAnerney both shot 62 on the day.
As a team, YSHS posted 207 and finished in fourth place in the quad meet against Dayton Christian, Emmanuel Christian and Xenia Christian. It was an improvement from the 218 they scored at the Metro Buckeye Conference tournament the previous week.

In a thrilling five-set victory over Emmanuel Christian, the Bulldogs charged out to a two-set lead before falling in the next two and eking out a narrow win in the last set. The final score was 25–23, 25–17, 20–25, 9–25, 15–13.
Hardman and Harshaw both registered 14 kills on the night, and Emma Peifer added six. Brown and starting freshman Meredith Rowe had 13 assists each. And Allen contributed four blocks, seven digs, and 25 passes. According to Coach Lindsay Kerns, the match was the highest level of volleyball she’s seen the Bulldogs play this year.

“When the games get close, rather than backing off, the Bulldogs seem to push through and want it more each time,” Coach Kerns said.

Trotwood Madison was a tough season opener as YSHS had to adjust to playing on artificial turf and with only 11 players, according to Coach Sarah Wallis. The game began with the Lady Bulldogs pressuring the Rams defense, creating opportunities for freshman Ayeshia Allison. Trotwood countered with speed but the defense led by junior Keturah Fulton managed to frustrate them with an offsides trap four times before they broke through and put one in the net. In the second half midfielder Emma Romohr was unfazed by the rough play and helped to create opportunities for Lucy Callahan and Kara Edwards, who scored with 10 minutes left in the game.

Local rival Greenon fielded a strong and disciplined team against the Lady Bulldogs last weekend but senior Ali Solomon did an outstanding job in goal with a career high of 10 saves in the first half. Freshman Alice Miller consistently frustrated Greenon’s outside midfielder by intercepting passes and pushing the ball forward. The second half saw more offensive opportunities for the Lady Bulldogs but none found the net.

The steadily improving Lady Bulldogs faced their first conference opponent Miami Valley Tuesday night. The Bulldogs pressured the Lady Rams with senior Paloma Wiggins testing the keeper in the 14th and 27th minutes. Miami Valley responded with quick transitions and were eventually able to put two in the net before halftime. The second half saw opportunities on goal from a corner by Edwards and a free kick from Fulton. The Lady Bulldogs worked well together and with Niki Worsham and Wiggins in goal, the YSHS defense made the Lady Rams earn every scoring opportunity.

“Lois and Alex both ran extremely strong, running in the top 10 throughout the five-kilometer race,” said Coach Vince Peters of the performances.

Miller aggressively attacked the course and led for large portions of the race. But the lead pack slipped away over the last half-mile and she finished fifth out of 119 runners in 22:01. Brown, who took a more cautious approach in the hot, muggy, 85-degree weather, finished eighth in 22:20. Despite the conditions both athletes showed significant improvement over their 2011 efforts on this same course.

Freshman Charlotte Walkey got stuck in the pack up the initial hill and found herself back in 48th place after the first mile. But after steady effort over the second mile, she moved quickly through the field, finishing 21st in 23:35. Christina Brewer knocked nearly 90 seconds off of her race time from a week ago to place 64th in 27:07. Niki Worsham completed the day’s scoring with her 86th-place finish in 29:34. AnnDee Pettiford came in 109th.

Boys XC comes up short
Weekend vacations and minor injuries proved detrimental to the YSHS boys cross-country team last weekend. But those who did compete gained some valuable experience, according to Coach Peters.

Sophomore Connor Gravley-Novello led the Bulldogs to the finish line for the second week in a row. A beastly first mile in 5:40 placed Gravley-Novello among the elite of the field. However the fast early pace and the hot, humid air took its toll over the last mile and he finished 37th out of the 144 runners.

Fellow sophomore Josh Seitz and senior Taylor Ford set off with a more conservative pace as both went through the first mile a minute slower than Gravley-Novello. Seitz was able to hold on to that effort as he recorded a season best of 22:43 on the hilly course, good for 86th place. Ford finished in 23:49, fast enough for 100th overall. Freshman Oluka Okia is adjusting quickly to the extra mile that high school cross-country athletes race. He placed 118th in 25:22. By not having enough finishers the Bulldogs were regulated to last place out of the competing schools.

McKinney boys XC finishes 8th
Five of the McKinney boys cross-country team’s six runners improved on their times from last week at the Ohio Classic in Hillsboro. Overall, the team finished in 8th place out of 15 schools.

Leading the way for the second week in a row was Hayden Orme, who placed 26th. He ran a conservative first mile in 6:20, but roared back to the finish at lightning pace to post a 12:12 finish for the 1.8-mile course.

Following Orme to the finish line were Cameron Haught (42nd in 12:35) and Levi Brown (68th in 13:20). Completing the team scoring for the squad were Kenny McKinney and Christian Elum in 104th and 134th places, respectively. Also improving was Kaden Boutis, who knocked a full minute off of his West Milton time to place 158th out of the 180 runners.

Brintlinger-Conn earns medal
In the middle school girls event at the Ohio Classic Meet, McKinney runner Olivia Brintlinger-Conn took advantage of an early start time to finish in the top 25.

Brintlinger-Conn competed in the first race of the day before conditions became truly hot, and took advantage of it by cruising the Liberty Park middle school 3000-meter course in a quick 14:16. She ran her first mile in 7:15 and then picked up her cadence from there to improve from 41st to place 22nd at the finish, earning her one of the coveted Ohio Classic XC Extravaganza top 25 medals.

McKinney volleyball teams 1–0
In its first match of the season, the ­McKinney seventh-grade volleyball team started out shaky, but came back to win against Indian Valley at home. After dropping the first set 20–25, the team took two straight sets, 25–18, 15–12.
Kennedy Young led the Lady Bulldogs with nine points and four aces, Jasmine Davidson added six points, four aces and one kill and Kallyn Buckenmyer contributed three points, two aces and one kill on the night. Also scoring were Elle Peifer, Skyler Miller and Evalynn Orme, while Nia Stewart had one kill and one block.

The eighth-grade volleyball team kept its winning streak from last season alive with an easy win over Indian Valley, 25–13, 25–17. Leading the team was Kasey Linkhart, who scored 11 points (7 aces), and added two kills, four assists and one block. Olivia Chick contributed eight points, including six aces, Elizabeth Smith had two assists, five kills and one point, Gracie Wilke registered four points and one kill and Julie Roberts scored four points along with a block and kill.