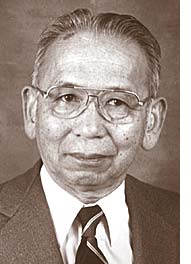 George Asakawa died peacefully at home on Sept. 11, in the company of his family and caregivers.

In his life of 94 years, George has been husband, father, fisherman, corporate executive, engineer, inventor, philanthropist and humanitarian. Born in 1918 and raised in San Diego, he graduated from the California Institute of Technology with a bachelor of science degree in chemical engineering. After completing his U.S. Army service, which spanned World War II, he and wife, Toshiko, came to Yellow Springs in 1945 to join his family, who had been detained in “concentration (relocation) camp” in Arizona and had been sponsored to the village by the Yellow Springs Society of Friends.

Hired at Vernay Laboratories by its founder, Sergius Vernet, as a research chemist, George was to spend the next 38 years there, rising to become president, CEO and, eventually, chairman of the board. As an engineer and inventor, he received a number of patents relating to thermostats, including the Vernatherm, originally developed for use in the first car heater. In his role as corporate executive, he expanded Vernay manufacturing and sales overseas to Holland, Japan and Italy, as well as began manufacturing in Georgia. He served as chairman of the Vernay Foundation, which awarded annual scholarships to top high school graduates, led and provided for the creation of the Glen Helen Building and annually funded numerous community, cultural and civic organizations.

As part of his humanitarian activities, he was instrumental in planning and fundraising for Friends Care of Yellow Springs, and was one of the first members of the Yellow Springs Human Relations Commission. He served as a member of the board of trustees for Greene Memorial Hospital, where he acted as president, vice president and secretary. While a trustee, he oversaw the expansion and renovation of the hospital, including the new Greene Hall, dedicated to the care of chemically dependent individuals. Throughout his working career, he was affiliated with Antioch Bookplate Company, YSI, Inc. and Miami Deposit Bank; he held most dear to his heart his founder’s work for the Yellow Springs Community Foundation. In 1988, he received the E.J. Nutter Award for outstanding community service.

George was modest and private, with an old-fashioned courtesy reserve, that would occasionally give way to blunt utterances. In his personal life, he was a formidable figure — but essentially kind and warm-hearted. Throughout his life, his passion had been his boats, to pursue his dreams of catching tuna and marlin in San Diego. He is survived by his wife of 67 years, Toshiko, their two sons, Carl (Andrew Pavey) and Stephen (Debra), and two grandsons, Nicholas (Anisa) and Eric.

In lieu of flowers, please consider a contribution to the Yellow Springs Community Foundation for the G and T Endowment, which benefits Glen Helen Nature Preserve, addressed to PO Box 55, Yellow Springs, OH 45387. A memorial is planned for 2 p.m. on Friday, Nov. 23, at the Glen Helen Building.