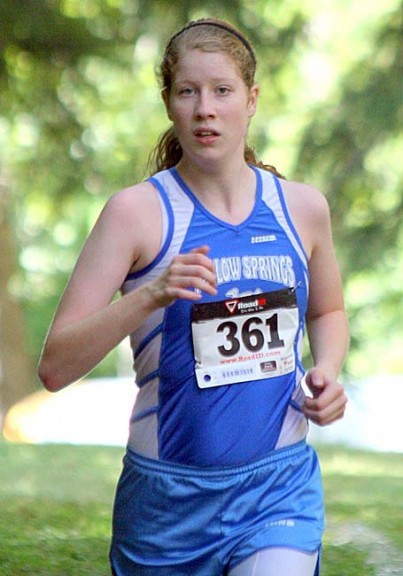 Lois Miller set a new senior class cross-country record with a time of 20:10 at the Eaton Invitational last weekend, besting the previous record by more than 20 seconds. Miller placed fourth on the run and propelled her team to an eighth-place finish. (Submitted Photo)

Lois Miller obliterated the senior class cross-country record of 20:43 that has been held since 1986, clocking 20:10. The previous record was held by YSHS graduate Swalla Abrams, who was the first of only three Yellow Springs women to have competed at the state cross-country meet. Miller broke the record while placing fourth overall out of 106 women at the 41st Annual Eaton invitational at Fort St. Claire Park. Along the way to the record for the 3.1 mile race Miller ran 6:02 for her first mile, and 12:33 for two miles.

The Bulldogs went on to place eighth out of 13 schools, including four of Ohio’s top 20-ranked teams.

Alex Brown and Charlotte Walkey ran strong coming off of illnesses. Brown finished 20th overall in 21:36. Walkey earned 31st place with a final time of 22:28. Joining Miller in battling to season-best times were Christina Brewer and AnnDee Pettiford. Brewer dropped a full minute off her previous best to finish 61st, and Pettiford closed out the team’s scoring in 100th place.

Sophomore Connor Gravley-Novello led his cross-country teammates to an impressive list of lifetime best performances by breaking the 19-minute barrier this past Saturday. Gravley-Novello lowered his personal record for 5k from 19:40 to 18:53 to finish 48th out of 144 runners.

Also running a lifetime best was fellow sophomore Josh Seitz. Seitz broke the 22-minute barrier for the first time while placing 105th in 21:58. Close behind Seitz, also with a lifetime bests, were freshman Oluka Okia and junior Cameron Henderson. Gabe Trillana placed 118th, followed by Dave Butcher and Edward Johnson, who both reignited personal records. It was the first time this year that the entire men’s team has run under 25 minutes. The team’s efforts helped the Bulldogs place 17th overall out of 22 schools in the race.

Over the last several weeks the YSHS boys varsity soccer team has taken on ranked opponents, conference foes and area rivals and escaped with a 6–3 record (1–1 in the MBC).

In a 2–0 loss to fourth-ranked Catholic Central, the Bulldogs were dominated physically, according to Coach Ben Van Ausdal. After going down 1–0 at Dayton Christian, Jared Scarfpin scored the equalizer, which held up until late in the game. But Dayton Christian scored the winning goal, and one more for good measure, near the end of regulation to win 3–1.

“Against both Catholic Central and Dayton Christian, if we were playing our best we could have won,” Van Ausdal said.

Against the unbeaten Kenton Ridge squad, the Bulldogs pulled ahead 2–0 by halftime with goals by Ian Chick and Roland Newsome. Chick also assisted on Newsome’s header into the net. The final tally was 2–1. Then at home versus one of YSHS’s biggest rivalries, third ranked Greeneview, the Bulldogs won 3–0 with goals by Chick, Scarfpin and Newsome and strong play from goalie Eric Lawhorn.

Finally, the YSHS team took on Tory Christian on Friday and went up 2–1 before a goalie miscue changed the momentum. The Bulldogs lost 4–2.

The YSHS varsity girls volleyball team added two wins over the week to improve to 9–3 on the season (4–1 in the MBC). Against conference foe Middletown Christian, the Lady Bulldogs won in straight sets (25–19, 25–23, 25–15). Kennedy Harshaw led the team in kills with 12. Meredith Rowe led the team in assists with 14. Maya Hardman and Kennedy Harshaw had seven digs each and Emma Peifer contributed 19 perfect passes.

“This was a big win for us especially since we lost to them both times that we faced them last season,” said Coach Lindsay Kerns. “[Middletown] had some amazing saves and plays but in the end, everything clicked for the Bulldogs,” Coach Kerns said. “Our passing specifically was some of the best that I’ve seen all season.”

The JV team also won against Middletown Christian that night.

Later in the week, against Jefferson, the Bulldogs dominated in three sets, only giving up 15 points over the night.

Runners on the McKinney School cross-country team improved with all five boys and its single girl member posting season bests at the Eaton Invitational.

Dropping her season-best time from 15:06 to a 14:39 over the two-mile distance was Olivia Brintlinger-Conn, who achieved the mark with a very strong first mile. She placed 17th out of 95 girls in the race.

In the boy’s race the dynamic duo of Hayden Orme and Cameron Haught smashed the 13-minute barrier with lifetime best times. Orme finished 10th in 12:23. Haught was 18th in 12:42.

Completing the scoring for the boys team was Levi Brown, 39th, and Christian Elam and Kaden Boutis close behind with personal records. Overall, the team finished seventh out of 16 competing schools.

The McKinney eighth-grade volleyball team exacted revenge on the team that delivered it its only loss of the season — Middletown Christian. The Lady Bulldogs won 25–11, 25–11 with 12 points from Kasey Linkhart, seven from Elizabeth Smith and six from Amelia Gray.

The seventh-grade team lost to Indian Valley 25–20, 25–18, though they kept the games close. Elle Peifer and Ella Comerford had four points each, while Brielle Willis contributed four kills.