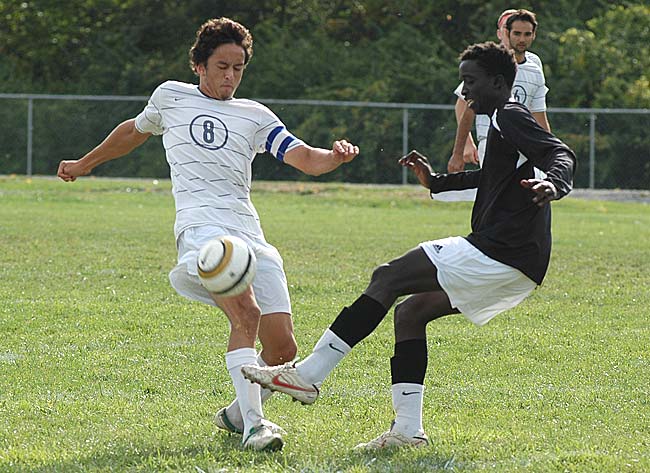 From the opening whistle of the match, the Yellow Springs High School boys varsity soccer team was in control against visiting Division I Fairborn on Saturday. The team dominated possession, passed crisply and found some good early looks on the goal. And the defensive line anchored by goalie Eric Lawson fought off several Fairborn offensive counters.

The Division III Bulldogs were finally rewarded with goals by Levi Perry, who had two on the night, and by Jared Scarfpin, and went on to take a 3–0 advantage in the hard-fought match. Ian Chick had two assists. While Fairborn scored one late, the victory went to YSHS, which improved its season record to 8–2 and added another impressive win over a Division I rival.

Earlier in the week, YSHS defeated another Division I opponent, Belmont, by a final tally of 8–0. Chick had a hat trick in addition to two assists. Perry found the net twice. Goals were also scored by Grant Reigelsperger and Roland Newsome. Meanwhile, the Bulldog defense only allowed two shots on goal all night.

Against Xenia, the Lady Bulldogs offense of sophmore Kara Edwards and freshman Ayeshia Allison pushed forward, but the opposing offense was quick on the counter attack and put one in the back of the net. The defense, organized by senior Keturah Fulton and freshman stopper Ashley Longshaw helped to shut down the middle. Yellow Springs scored midway through the second half on a Fulton free kick, which resulted in an Edwards goal, her second of the season.

Freshman Charlotte Walkey advanced to 13th on the all-time YSHS runners list with a 21:55 personal record time for the 3.1 mile race at Ohio Caverns near West Liberty, Ohio. Walkey placed 12th, just two seconds behind Lois Miller at 11th place out of 124 runners.

At the Bellbrook Invitational, the girls cross-country team finished third out of nine schools to improve to 37–34 on the season. The Bulldogs were led by Miller who came in third place out of 62 women with her fastest time of the year: 20:22. Walkey finished 19th overall in 23:02. And Brewer ran to a new season-best time of 24:08 to place 26th.

YSHS girls soccer team captain Niki Worsham helped propel the Bulldogs to third. She ran to 41st place with a time of 26:30. Completing the scoring was Pettiford with her second best time of the year, 29:17.

Boys XC toughs it out

There were two notable performances of the 3.1 mile race at Ohio Caverns Invitational last week. The first was by David Butcher, who got up after being badly spiked early in the race. The second was by Connor Gravley-Novello, who set a new personal record with a 18:49 finish, good for 34th place out of 133 runners.

Later in the week, at the Bellbrook Invitational, freshman Okia was able to stride to a new personal record of 22:21, despite a slippery course. That was good for 85th out of 116 runners. Teaming with Okia at the front of the Bulldog pack was Gravley-Novello, who went on to place 43rd in 19:38.

As a team boys cross-country slid into a seventh-place finish out of nine high schools, with the help of Seitz, Trillana and Cameron Henderson. Also competing with abandon on the day were Taylor Ford in 24:26, with Edward Johnson a step behind in 24:27, and Butcher in 24:49.

The Bellbrook Invitational was a breakout race for Cameron Haught and fellow eighth grader Levi Brown as the McKinney boys cross-country team placed three runners in the top 25. Brown had a season-best performance, lowering his time for the two-mile course to 13:10. Meanwhile Hayden Orme came on strong over the last half mile to secure 15th place out of 159 runners. Seventh-graders Kaden Boutis and Christian Elam also ran solid races. As a team, they placed sixth out of the 14 schools competing.

On the girls team, eighth-grader Olivia Brintlinger-Conn actually had to swim across one of the creek crossings after getting clipped from behind during the race. But she got right back up and finished the race in 14:58, good for 19th out of 123 runners.