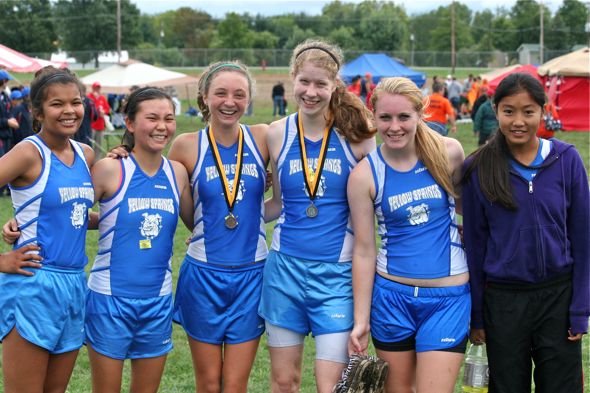 In taking on the Dayton-Springfield area “behemoths” at the Watkins Invitational in Fairborn last weekend, the Yellow Springs High School girls cross-country team did something that the other sports teams at YSHS rarely attempt, according to Coach Vince Peters. And the Bulldogs came out in an impressive third place out of 16 schools to improve their record to 20–13 on the year on a record-setting run by senior Lois Miller. 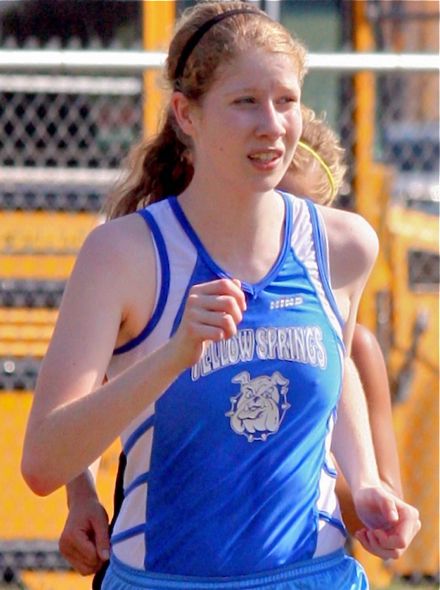 Miller finished in 20:56 at the Watkins Memorial to take first place and set a new meet record. (Submitted photo)

“The big blue and white calmly walked to the starting line surrounded by large division I powerhouses like Fairborn, Xenia, Beavercreek, Bellbrook, Sidney and Wilmington,” Coach Peters said. “Then our women’s cross-country team promptly bared their spikes and showed the lasses their heels.”

Led by team co-captains Miller and Alex Brown, the Bulldogs went immediately to the front of the pack. Miller opened up a small gap going into the hilly section of the course, but the Bulldogs were prepared for the climb. Brown and Charlotte Walkey settled comfortably into the chase pack in the fifth and sixth positions.

Miller cruised in to a new meet record and season best time of 20:56. Brown took seventh in 22:25, and freshman Charlotte Walkey finished 10th with a personal record time of 22:42.