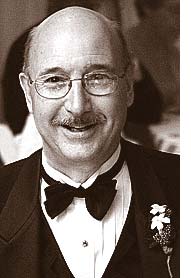 Thomas Edwin Bingenheimer of Rosemont, Pa., an Antioch College graduate, died May 4 at the Neighborhood Hospice in West Chester, Pa. He was 65 years old, and his loss has been unbearable for all who loved him.

Tom was born in Lafayette, Ind., to the late Dr. L. Edwin Bingenheimer and his wife, Mary. He was the first of four brothers. The family moved frequently while Tom was growing up, first to St. Louis, Mo., then to Memphis, Tenn., and finally to Lincoln, Neb., where he graduated from Lincoln Southeast High School. Tom earned his bachelor of arts degree at Antioch College in 1970 and moved to Philadelphia, to pursue a graduate degree in communications from Temple University. Philadelphia became his permanent home.

Initially, Tom began a career in the printing and advertising industry, serving as president of the Philadelphia Direct Marketing Association from 1993–94. His many years of experience in this field made him invaluable to MBNA America Bank in Wilmington, Del., when he moved over to the procurement side of this busines and managed outside vendors and contract pricing. He continued on in “enterprise sourcing” and supply chain management with Bank of America when they acquired MBNA and sourced $160 million in annual spending across the enterprise.

Tom never stopped learning, earning his master of business administraiton degree from Villanova University in 2003, where he was a member of the dean search committee for the College of Commerce and Finance as well as a chair of their Graduate Student Advisory Committee.

Tom also had many activities and interests outside of his work. He was an avid skier, an enthusiastic sailor and a passionate scuba diver, even braving the cold northeast Atlantic waters in the pursuit of lobsters. His many guitars and his intense love of music brought him many hours of pleasure. He traveled often with his family throughout America, Canada and Central America, plus sailing the Caribbean and skiing in Austria. These wanderings then extended to Hawaii, Thailand, Ecuador and Peru, and to safaris in Kenya and in Botswana.

Tom remained an lifelong Antiochian, attending several reunions over the years, and was active in the Philadelphia chapter of the alumni association.

A memorial service was held for Tom on May 23 at the Bringhurst Funeral Home for family and friends. Donations may be made in his name to the National Brain Tumor Society, 124 Watertown Street, Suite 2D, Watertown, MA 02472, or to Antioch College Advancement Office, 1 Morgan Place, Yellow Springs, OH 45387.