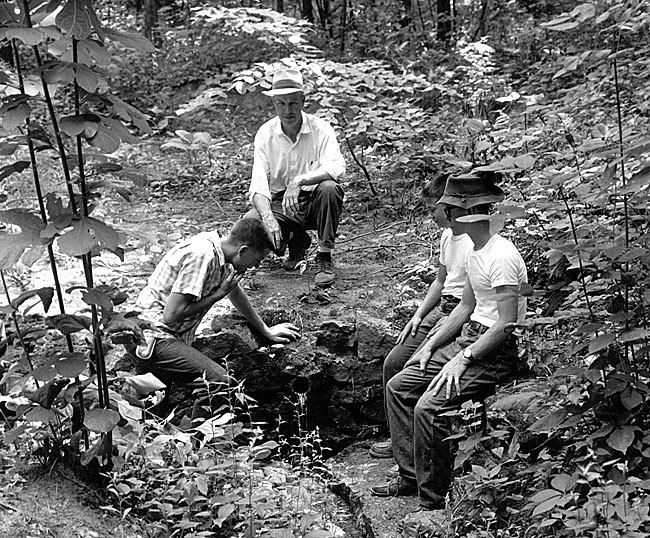 Lloyd Kennedy with students by the spring in the Glen's pine forest in the 1950s.

The Village of Yellow Springs and the Yellow Springs Tree Committee will celebrate the rededication of Ellis Park as what will now be known as the Ellis Park and Lloyd Kennedy Arboretum. A ceremony will take place at the park on Friday, Sept. 28, at noon.

The park on Polecat Road features a two-acre arboretum with about 130 trees that was initiated by the Tree Committee while Kennedy was its president. The renaming of the park honors Kennedy, who has personally had a hand in planting about 2,000 trees around the village.

Kennedy served as tree consultant for the Village for many years while working as a state inspector for retail nurseries. He became an especially active tree planter after his retirement in the 1970s, starting with trees on Mills Lawn grounds, followed by trees on village streets, at Gaunt and Duncan Parks, and many other sites.

The Kennedy arboretum is designed for observing trees of many types to help residents  make decisions about home plantings. The park is also a place to relax and enjoy a variety of beautiful trees that constantly change with the seasons.