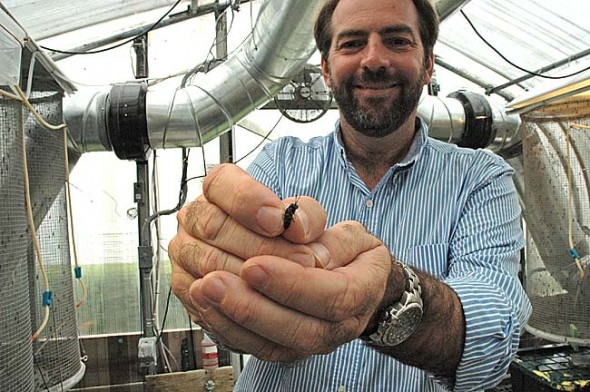 “Bugman” Glen Courtright shows off one of his million-plus helpers, a black soldier fly, whose larvae he cultivates to produce a high-protein feed. The flies themselves feed off distillers grains, a byproduct of the brewing and biofuel industries. (Photos by Lauren Heaton)

What’s the buzz about the bugs?

Though it is a source of some chagrin to him, the cultural reference that most immediately represents the business Glen Courtright has created here in the village is Disney’s 1994 classic The Lion King. Specifically pertinent is the part in the film when the lion, the warthog and the meerkat feast on a cornucopia of bugs while singing their “problem-free philosophy.” After three and half years of research and painstaking trial and error inside the facility he has built at MillWorks, things are starting to look like hakuna matata for Courtright, as his business Enviroflight takes off.

At the heart of the buzz is the most unlikely black soldier fly (hermetia illucens), a non-pathenogenic insect, which produces a larvae that many animals from fish to monkeys love to dine on. Bug meal may not sound like gourmet fare to humans, but to fish and other animals, it rivals the choicest feed around. That’s good news for the fish farming industry, since bugs and the grains they process are a high quality, affordable source of nutrition for many species. And it’s good news for Courtright, who invented a way to use an industrial biproduct to mass produce feed at a cost he believes could revolutionize the world’s food system.

Visitors to MillWorks can expect to see an occasional long-bodied black fly loitering outside the greenhouse Courtright calls the “Barry White room.” Inside, even at night, it is always a balmy, tropical day, with a balance of tunes from Pink Floyd, Indian pop and Barry White to set just the right mood for the tens of thousands of flies to mate and lay their precious eggs. The eggs quickly grow into the hungry larvae Enviroflight uses to process distillers grains into an animal feed that is higher in both protein and fat than when it arrived. The ration will feed, among other animals, sustainable farm-raised fish in a state that is ripe for growth in aquaculture, or commercial fish farming.

“We’re transforming low-grade waste materials into a high-value protein source that’s clean, toxin-free and sustainable, and it could be leveraged to feed a lot of people,” Courtright said. “It’s not going to solve world hunger, but it could come pretty close. We know we’re sitting on something pretty powerful.”

Courtright’s five employees sometimes tease him about walking around the facility singing the “Circle of Life.” But he’s not joking about a process that took him considerable time and significant personal and professional heartache to perfect. He came to the project as a skeptic in the biofuel industry, having worked specifically on how to make biodiesel more efficiently. But he found the field to be faulty, and he wanted to do something to help solve a global problem without adding additional ones in the process.

“One day I kind of had an epiphany that it was more important to feed the world than to put fuel into cars,” he said.
So he went out on his own, with a few scientist-investors, to bet on the biproduct of ethanol production — dried distillers grain with soluble (DDGS).

As a source of food that feeds the bugs that feed the fish that feed us, distiller’s grains are affordable because they are a waste product and a plentiful one. Beer and alcohol breweries and distilleries alone discard mountains of DDGS. But the boom in fuel ethanol production has ballooned the DDGS output to over 42 million tons per year in the U.S., according to an Iowa State agricultural extension study, much of which is used for beef, dairy, swine and poultry feed.

Courtright has tailored formulas of his souped-up feed for multiple species of reptiles, birds and small mammals, and has recently become a supplier for the Cincinnati and Indianapolis zoos, with contracts pending for seven additional zoos in the tri-state area. But his real goal is to tailor formulas for the various species of fish and seafood raised for human consumption, and to promote fish as an environmentally sustainable food source, particularly in landlocked regions that aren’t traditionally known for their huge caches of sushi.

Take Ohio, for instance. According to Laura Tiu, a senior researcher for the Piketon aquaculture program at Ohio State University, because fish can be safely farm-raised in tight spaces, the resources needed to grow a pound of fish are significantly lower than what’s needed for the same amount of beef, pork or poultry. That makes fish the least expensive form of animal protein to cultivate and therefore the most promising solution for feeding populations worldwide, Tiu said in an interview this week. And while traditional fish food includes the expensive and unreliable meal from smaller fish such as anchovies and menhaden, Enviroflight can now produce a cost-effective, local version of fish food that is just as nutritious as the kind that comes from overtaxed ecosystems overseas.
“We’re going to have to double the food supply in the next 30 years to feed the projected increase in population and account for the increase in standard of living, and aquaculture is part of the answer,” Tiu said. “Glen’s product has the potential for global implications. It’s not going to stay just here in Ohio — this will explode nationally and internationally.”

Other researchers are working on the problem of raising bugs for animal feed, but according to Ohio Aquaculture Association President Bob Calala, none are as far along as Courtright, who last month filed two patents for his work. And while solving the bug reproduction process has been a challenge, Courtright is already making moves to expand his research and operation to producing the fish he feeds. Last month he installed about 30 fish tanks at the MillWorks facility for testing growth rates for various species of fish using specially formulated feeds. He plans to hire about five more employees in the near future.

Courtright chose Yellow Springs as the place to test his theories and realize his ideas because of its safety, open-mindedness, and environmentally conscious values. He moved here from Centerville last year because of the walkable, creative, sustainable lifestyle he found here. And he plans to continue to headquarter his business here because it works as a place to germinate big ideas. Courtright’s idea was bugs, which are actually small, but which he believes are the answer to a lot of big problems.

“How are we going to feed 9 billion people? The answer is fish. How do we feed fish? We believe it’s insects,” he said. 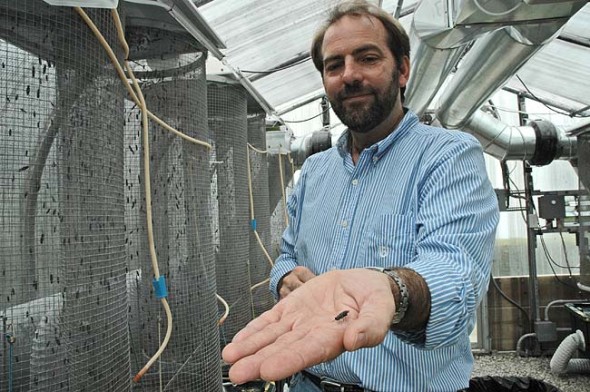 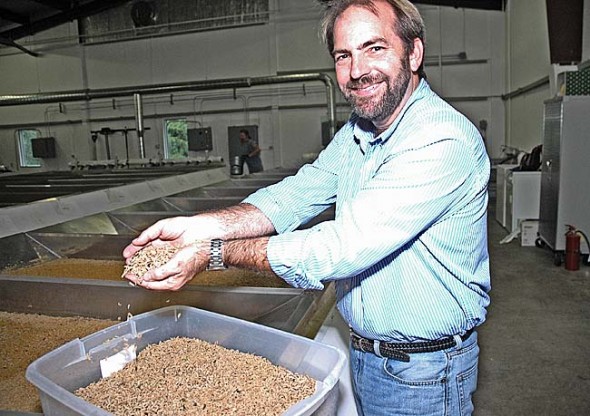