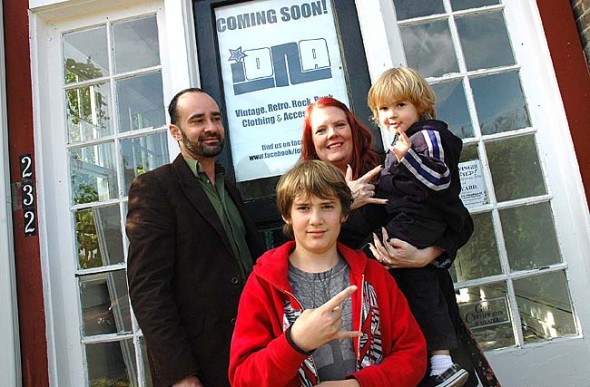 Villager Kira Lugo, center, is opening a funky new clothing boutique in the space recently vacated by Sam & Eddie’s Open Books. The store will sell new clothing in vintage and retro styles from the 1940s to 1980s. With Lugo are her husband, Brian, and two of her four children — 12-year-old Zach and three-year-old Noah. (Photo by Megan Bachman)

Merging fashion and music from the 1940s to 1980s, Iona Boutique is set to open next month at 232 Xenia Avenue in the space recently vacated by Sam & Eddie’s Open Books. According to villager Kira Lugo, the woman behind the conceptual shop, retro looks are becoming more popular, but they’ve always been en vogue.

“The trend of vintage and retro came back with [the television show] Mad Men,” Lugo said this week. “But for me it’s always been in style. There are just these surges.”

The designs may be vintage, but the clothing for sale is all new, available in a wide variety of sizes and price ranges and mostly American-made, Lugo said. At Iona you can get workplace attire, a cocktail dress, an outfit for clubbing, and a prom dress or suit, all at one place. Mixing and matching is encouraged: Don’t be surprised to see someone walk out with a 1950s-era chiffon petticoat paired with combat boots.

With a background in clothing retail and a degree in fashion merchandising and design, Lugo finds herself the perfect person to bring the latest throwback style trends from the coasts to the Midwest. And she finds the funky town of Yellow Springs the perfect place for her funky store.

“You can walk down the street here and see a girl with punked out hair and tattoos and then see someone in a business suit,” Lugo said. “We welcome everyone, and you can fit in no matter what. That’s why I think I’ll fit in.”

Though clothes will be Iona’s main draw, the store will also sell purses, jewelry and home accessories. The vibe of the shop, located in an 1800s brick building, will be retro too — with posters of movie stars and pop icons along the walls and the sounds of music through the decades.

The popularity of retro styles goes in cycles, Lugo explained. In the 1980s, the shoulder pads of the ’40s and leather jackets of the ’50s came back (think Grease), and now the ’80s are back.

“It’s about nostalgia,” Lugo said of the trend. “People like to think back to a time when they were younger.”

The timing is perfect since Lugo, 41, is a child of the ’80s and a big fan of the pop culture of that decade. She even named the store after a character in the John Hughes movie Pretty in Pink. In the movie, Iona is a 30-something woman who wears a punky leather vest with spiked hair in one scene and later a ‘40s dress with big shoulders. Iona’s fashion boldness is instructive.

“Like her I want to inspire young people to be who they are, to dress how they want and to just be themselves to the fullest,” Lugo said. She said she hopes local teens can find styles at her store so they won’t go to the mall. And she eventually wants to start a complimentary nonprofit to help teenage girls with self-esteem.

Lugo also said she hopes to someday design her own line of clothing, reaching a dream she has had since she was a teen. An Erie, Pa. native who moved to the village with her husband and four children a few years ago to be near family, Lugo worked for years in corporate America for Target, JC Penny and The Limited. Now she’s excited to have her own place, and to be in Yellow Springs.

“When we moved here we wanted to open a business just to be a part of it all,” Lugo said. “It’s like we’re laying down roots and becoming part of the community.”

Iona will have its grand opening on Nov. 16, the night of a Third Friday Fling. For more information and updates, visit http://www.facebook.com/ionaboutique.