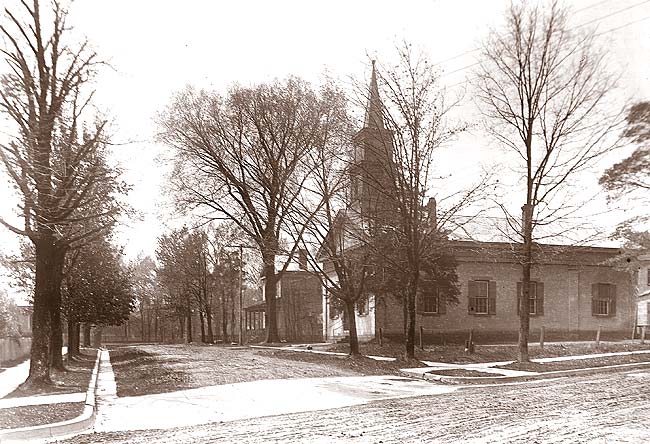 The United Methodist Church at its Winter Street location, as seen from Dayton Street in the early 20th century. The photo was developed from a glass negative owned by Howard Kahoe.

It was the year Martin Van Buren became the eighth president of the United States. Two months after his inauguration, New York City’s major banks failed, igniting the “Panic of 1837.” And in that same year, right here in Yellow Springs, the United Methodist Church held its first meetings.

This past Sunday, the Yellow Springs Methodist Church, as part of a celebration of its 175th birthday, hosted a “Reader’s Theater” entitled “The Mostly True Story of the Yellow Springs Methodist Church.” The play, written by Macy Reynolds, featured seven young readers dressed in 19th century period clothes, and highlighted the history of the church.

According to Reynolds’ script, the church had its beginnings in the late 1830s as the Society of Methodists. At first, a small group of congregants held meetings in a variety of locations that included a barn, an old school house, and a clearing in the woods. In the play, one speaker tells the audience, “Our first meeting in the forest was filled with a dappled sunlight, singing birds, and some good preachin’.”

In the early 1840s, a church member by the name of Judge William Mills donated a piece of land as the site for a new building. And in May 1842, the congregation dedicated a new church on the corner of Dayton and Corry Streets. As the congregation grew, the members felt they needed a larger space to conduct services. So in 1850, they built a new church on its present site on Winter Street. In 1866, members built an addition onto the west side of the church, and in 1910 they added stained glass windows and two new wings.

The church had a serious setback in 1936 when a chimney fire destroyed part of the building. Eventually, with help from the community and some Antioch students, the damage was repaired. And in 1952 the church added an education wing. 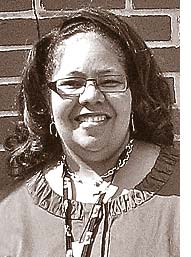 Sherri Blackwell, who graduated from Yellow Springs High School in 1981, has served as the church’s pastor since 2010. She said that growing up in a small and diverse community contributed to her views about religion and the way she conducts her sermons.

“I have a very ecumenical approach to faith,” she said. “I’m a Christian, so I believe in Jesus Christ. But I think lots of us have experiences of God, and my personal belief is that I don’t think that any one human being has the total experience of God. I think that when we put those experiences together that we get a sense of who God is.”

Blackwell, who most people back in the 1970s and 1980s knew as Sherri Upchurch, began her education in a kindergarten in Yellow Springs that was held in the Presbyterian Church. After high school she went on to Oberlin College, where she graduated with a bachelor’s degree in English.

Her path to becoming a pastor began in a rather circuitous way.

Her first major career was working for a contractor at Wright Patterson Air Force Base that was involved in anthropometry—a field that is often referred to as human factors engineering.

“The work involved human body measurement,” she said. “And using those measurements we were able to apply them to things like work station layouts, cockpits, uniform fittings, masks, gloves, and protective clothing.”

Twenty years later, Blackwell realized she was ready for a career change. And it was at a time in her life when she felt the need to answer a calling.

“I think the call to ministry has always been there for me,” she said. “I came out of the Baptist church here in town, and at that time they fervently believed that God did not call women into ministry. And that makes it difficult to discern a call to ministry when all you’re taught is that God doesn’t use women.”

In other religious denominations that view still prevails.

In an article in the Sunday, Sept. 30, 2012 issue of The New York Times, Judith Levitt reported that “Catholic clergy in Europe, Australia and the United States who have voiced public support for female ordination have been either dismissed or threatened with removal from administrative posts within the church.” Levitt went on to say that in 2008, “the Vatican decreed that any woman who sought ordination, or a bishop who conferred holy orders on her, would be immediately ‘punished with excommunication.’”

Blackwell’s views about women and ministry changed after graduating from Oberlin.

“When I came home from college I had different experiences, and I started meeting women who had very clearly described calls to ministry,” she said. “But for them it wasn’t just a call; they were actually ministers working and you could see the fruits of their work. So I came back and started asking questions. But these women really seemed to be called into ministry so what I was taught and what I saw in the world started to collide.

Blackwell said that a series of epiphanies, which often came to her in metaphorical dreams, along with some important mentors convinced her to pursue her calling to ministry.

Over the next decade Blackwell completed three graduate degrees — a masters in management from Antioch McGregor in 2001; a masters of divinity from the United Theological Seminary in Dayton in 2006; and a master of arts in care giving in 2007.

This past June she became an ordained minister.

“I think that there’s more to worry about in the world than if somebody worships God in a slightly different way than I do. Or even if you interpret God differently. I don’t think it’s my place to tell somebody who God is or if there has to be a God. I believe there is a God, and I have experiences that back that up for me.”

And her views also extend to atheists.

“If somebody doesn’t believe in God, that’s between them and God. I’m not affected by that. I think God is bigger than our religious squabbles on the earth.”

These days the Yellow Springs United Methodist Church has about 65 congregants. Most of the church activities are on Sunday morning, but there are also periodic meetings, potlucks and other informal gatherings. Sunday school opens at 9:30 and worship services begin at 10:30. Blackwell said her church conducts traditional services that last about one hour. After the services there is a period of coffee and fellowship.

On Wednesdays Blackwell spends her day at the church attending to business affairs and her upcoming Sunday sermon. Two days a week she works at the Open Hands Free Store in Springfield, a combination Goodwill store and food pantry.

And one evening a week, she gets together with a couple of people from the local Catholic Church.

“It’s at 7 p.m. at Dino’s on Wednesdays, and it’s called ‘Coffee and Conversation,’” she said. “It’s just a chance to talk about a variety of topics. Topics can vary. Sometimes there is a need to process scripture and try to come to terms with how you integrate scripture into the challenges of everyday life.”

On its website the Yellow Springs United Methodist Church posts a statement that underscores Blackwell’s ecumenical views: “Our mission is to know Jesus Christ and to share His unconditional love.”

“I don’t want Christianity to be characterized by the extremists that we have, so I don’t characterize Muslims that way,” she said.

“Human kind is created in God’s image, so if I’m supposed to love people, that includes people that have different interpretations than me.”

The Yellow Springs United Methodist Church is located at 202 S. Winter St. Its website is http://www.yellowspringsumc.com.