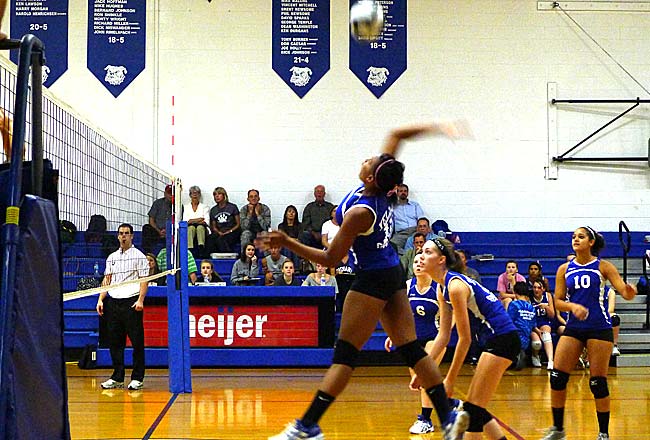 Yellow Springs High School volleyball star Kennedy Harshaw spiked the ball back at Troy Christian at a home match last week. Harshaw led the Bulldogs to a three-set victory with 10 kills and 10 digs on the night. (Photo by Megan Bachman)

Junior Rachele Orme, the first female golfer in Yellow Springs High School history to qualify for districts, competed at the meet last Wednesday at PipeStone Golf Course in Miamisburg and posted a career-best 86 over 18 holes.

Orme started out strong with 40 strokes on the front nine. But even with her best career showing from the girls’ tees (she has posted an 89 from the boys’ tees), Orme was denied a state berth. She finished tied for 10th place among 70 golfers; only the top three finishers moved on to the state finals.

“I’m very proud of her effort today and she can certainly be proud of it also,” Coach Mike Reichert said.

After a number of late season injuries the YSHS girls varsity soccer team faced Dayton Christian in a downpour on Monday, Oct. 1, and held the Warriors to 3–0 at the half. Senior Lucy Callahan and sophomore Kara Edwards connected passes that repeatedly broke through the defense but were gathered up by the Dayton Christian keeper. Sophomores Jesi Worsham, Emma Romohr and Izzy Long kept crosses to a minimum, and sophomore Hypatia McLellan and freshman Ashley Longshaw played well in goal under very challenging circumstances.

On Thursday, the Lady Bulldogs faced defending conference champions Troy Christian (11–1) at home. The Lady Bulldogs dictated the pace of the game for the first minutes. Callahan and Edwards continued to connect passes and created multiple opportunities at goal. Troy Christian led at halftime but the Bulldogs came out strong. Seniors Keturah Fulton and Paloma Wiggins worked the ball up the field continually to Edwards and freshman forward Ayeshia Allison, but they were unable to score against a solid Troy Christian defense.

YSHS then went on to face a new opponent from Cincinnati, St. Bernard Elmwood Place. Without subs and not knowing what to expect, the Lady Bulldogs played hard in an evenly matched game. St. Bernard managed to put two crosses in the back of the net before Edwards answered on an unassisted goal. Fulton and freshmen Ursula Kremer and Alice Miller played close defense. Seniors Ali Solomon and Wiggins pressured the St. Bernard midfield, which resulted in a late game breakaway for Solomon. It was a great game, but St. Bernard came out on top with a 6–1 result.

In the much anticipated boys race, Greeneview came away with the victory. New runner Jared Scarfin teamed with regulars Connor Gravley-Novello, Josh Seitz, Oluka Okia and Gabe Trillana to register a respectable team score of 32. Also competing for the Bulldogs were Edward Johnson and Cameron Henderson.

On Thursday, the streaking YSHS girls varsity volleyball team improved to 14–4 with a straight set victory over visiting Troy Christian (25–20, 25–15, 25–10). Despite a challenge in the first set, the Lady Bulldogs stayed strong and handily cruised to victory. The home team is now second place in the Metro Buckeye Conference with a 6–2 conference record.

The McKinney cross-country squad came away with a decisive victory over Xenia in a home meet at YSHS last week. The team was led by eighth-grader Hayden Orme, who roared through the first mile in 5:45 to build a lead that couldn’t be overcome. He won the two-mile race in 12:19. Levi Brown and Cameron Haught placed fifth and sixth, respectively. Seventh-graders Christian Elam and Kaden Boutis completed the scoring by finishing in seventh and eighth place.

The previous Saturday the team placed sixth out of 20 middle schools. There, Orme, Brown and Haught finished in lifetime bests and placed in the top 20 out of 146 finishers. Orme ran to fifth place in12:07, Brown placed seventh in 12:22 and Haught came in 17th with a time of 12:40.

In the girls race, Olivia Brintlinger-Conn ran negative splits by running a quick 7:31 on her second mile after passing the halfway pole in 7:38. The super-fast eighth grader finished 30th out of 120 runners, in 15:09.

After winning the Metro Buckeye Conference title as seventh graders, the McKinney eighth-grade volleyball looked for a repeat performance at this year’s league tournament.

The girls took on Dayton Christian in the semis, beating the Warriors easily, 25-6, 25-13. The Lady Bulldogs won the first game with only four players serving. In the second game of the match they rotated completely around the court only once. Dani Worsham had the best game of her middle school career with seven kills.

In the finals, Xenia Christian pulled ahead 2–7 before the Yellow Springs girls swallowed their nerves and took control of the game. Though Gracie Wilke wasn’t the leader in stats, she turned the game around with her great serves, according to Coach Chris Linkhart. Once the Lady Bulldogs regained control, they never looked back. Kasey Linkhart also had her best game of the season, dominating at the net. The Bulldogs won the match and the trophy and ended with a 13–2 season record.

Meanwhile, the seventh-grade team played its best volleyball all season. They advanced to the finals on a defeat of Xenia Christian (25–17, 25–17). But the seventh graders lost to Emmanuel Christian to come in second place in the MBC. In the final match Raven James led with six points and Nia Stewart and Brielle Williams had five each.

“They were really pumped up and ready to play,” said Coach Linkhart of the seventh-grade team. “They served well, passed well, and set the ball up for the most kills they’ve produced all season.”