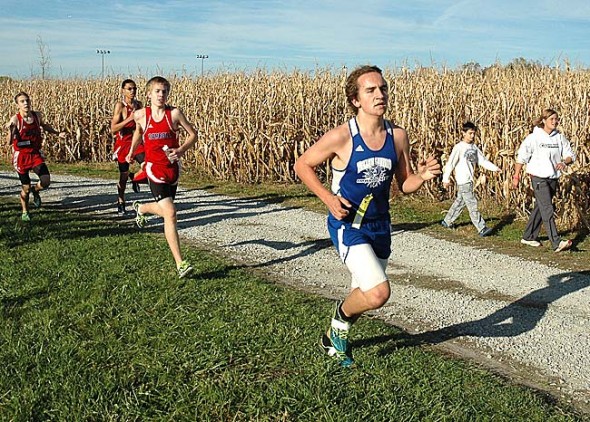 It came down to their last game of the season. A win would mean a Metro Buckeye Conference championship that has eluded the Yellow Springs High School boys varsity soccer team for five years. A loss would bring a second MBC loss and a second place showing to rival Dayton Christian.

But the Bulldogs defeated Miami Valley 4–1 in a dominant showing to win the game and the conference crown.

“It was an unbelievable night — to both finish the season and win the conference,” first-year Coach Ben Van Ausdal said this week. The team ended the season with an 11–3–1 record (3–1–0 in the MBC) and a fourth-place ranking among all Division III teams in the Dayton area.

During the Miami Valley game, goals were made by YSHS players Levi Perry (2), Grant Reigelsperger and Gage Miller, while Miami Valley only found goal after a failed clearance by a Bulldog defender.

In pursuit of their 10th season victory earlier in the week, the Bulldogs went up 3–0 by the half only to see their lead eroded by two Northwestern goals. But YSHS sealed the win with two more insurance goals. Scoring were Perry (2), Ian Chick (2) and Jared Scarfpin.

The Bulldogs begin post-season play as the fourth-ranked team in the 26-team district tournament. Last year the YSHS team fell in the district finals. Though his work continues, Van Ausdal is thrilled with the season so far.

“I couldn’t have asked for a better season as a first-year head coach,” he said. Van Ausdal was the assistant coach to Jim Hardman for 10 years before getting the job when Hardman moved to Denmark. He credits Hardman’s continuing guidance, which now takes place via email, for such a successful season.

“Without him I couldn’t have done all of this,” Van Ausdal said.

Three years after a winless season at 0–11, the YSHS varsity volleyball team not only had a winning season in 2012, they finished second in the MBC with a 15–4 record (8–2). Ending the season with a 2–1 stretch, recording wins over Troy Christian and Xenia Chrsitian, the Lady Bulldogs head into the district tournament as the 12th seed out of 27 teams, its highest seed ever.

Kennedy Harshaw led her team in all three matches over the week in kills and aces. Emma Peifer, Maryah Martin, Hannah Brown and Maya Hardman also contributed to the victories.

Led by seniors Miller and Brown, the YSHS girls team narrowly missed a conference title. Miller took second-place overall in 20:44 on a course that is notoriously difficult and long. Brown placed fifth overall in 21:50. In ninth was freshman Charlotte Walkey, with a final clocking of 22:52. Christina Brewer (12th), Niki Worsham (16th) and AnnDee Pettiford (18th) completed the team’s scoring.

“I was very encouraged by the toughness of the ladies on this difficult course,” said Coach Vince Peters.

In the boys race, sophomore Gravely-Novello earned all-league with a seventh-place finish of 18:56, which he acheived with a quick 5:38 first mile and final sprint. As a team the Bulldogs came in sixth, with finishes from Josh Seitz, 29th, Cameron Henderson, 37th, Oluka Okia, 38th, and Edward Johnson, 39th. Completing the Bulldogs’ day was the squad’s lone senior Taylor Ford, who placed 46th.

The McKinney boys team was led by Brown, who won the two-mile race in a personal record time of 12:18. Orme finished second in 12:42 and Cameron Haught came in fourth with a time of 12:50. Also earning first-team all-league was Olivia Brintlinger-Conn, who charged into the hills and sprinted down the competition for a sixth-place finish in a personal record of 14:29.