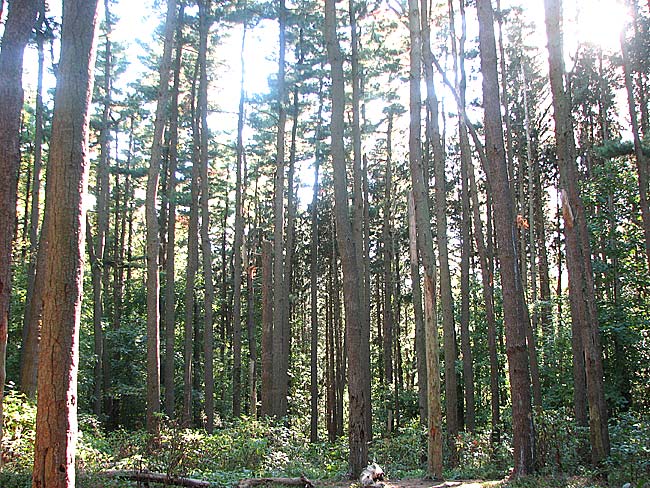 After more than 50 years in an environment that was never meant for large conifers, the Glen’s pine forest appers to be thinning to extinction. (Photo by Jeff Simons)

Pining for a greener forest

It was once one of the more pristine parts of the Glen — a sublime outdoor cathedral. Hundreds of white pines and Norway spruces towered some 60 feet over the sloping, spongy undergrowth. It was an unusual ecosystem for southwest Ohio — more like something native to Minnesota or northern Michigan. In the 1970s it became a sort of spiritual magnet for thousands of people — the site for weddings, retreats, reunions, and romantic rendezvouses.

The Glen’s pine forest wasn’t all that big — less than 50 acres. But for runners, bird watchers, and weekend trekkers it was a delightful destination. The place to scoop a handful of cold water from a spring or stretch out on a wide log and drift off to sleep under the lush canopy.

But unfortunately, the forest is disappearing. And it’s not the result of global warming, logging, or pollution.

“The pine forest is failing because it’s not native and it’s too far south,” said George Bieri, land manager for Glen Helen. “Right now the white pines are going on 80 years, and they’re going down. The only trees that are going to hang in are the Norway spruces.”

“The challenge from a forestry perspective is that pine forests don’t grow around here,” he said. “The environment isn’t right because those trees like a more acidic soil.”

In a natural pine forest, like the ones found in Michigan or Pennsylvania, Boutis said, trees will gradually self-sow over time, resulting in ones that are really old and others that are really young. And that cycle perpetuates itself. But in the case of the Pine Forest, all the trees were planted at the same time.

In an article by Janet Pattee Chu, published in the February 1965 issue of American Forests, the area of the Glen now known as the pine forest was initially called Big Pine Woods. And it got its start in the 1920s when the Ohio Forestry Department planted Norway spruce and two varieties of pines.

“They decided to do experimental planting,” said Bieri. “The area was denuded, and there was tremendous erosion. So they planted Austrian pine, white pine, and Norway spruce, along with red oak, ash, poplar, and locust. So what you have is basically the remnants of a pine plantation.”

In a natural pine forest further north, Boutis said, there would be a much greater diversity of other tree species and understory trees that work well with pines. For example, birches and alders, species that are not ordinarily found in this part of Ohio, often grow within and around northern pine forests.

In the 1930s and 1940s the pine trees were still small and young enough for an observer to see all the rows in which the trees had been planted. And according to Bieri, the initial pine plantation consisted of hundreds of trees.

But over the next 20 years, things dramatically changed.

“By the 1950s and 1960s enough of the trees had grown large or died out that you couldn’t tell any more that this was a plantation,” Boutis said.

“It was then that the forest entered into its glory years where the trees were healthy, and the needles underfoot were soft,” he said. “But gradually the trees started to die out because they weren’t—and still aren’t—getting the right food mix. And that’s because the soil is all wrong for those trees.”

Boutis added that in the parts of Ohio that weren’t glaciated, such as the Hocking Hills region, the soil is more acidic. And in that type of soil, native conifers like hemlock do well.

Along with unfavorable soil conditions, the pine forest faced another threat — one that persisted through the 1930s and 1940s. According to a paper on file with Antiochiana, written by James Andrew Palmore, Jr. in 1957, during those decades Antioch College students and Yellow Springs residents were indiscriminately cutting down pine trees during the Christmas seasons. In an effort to prevent further damage to the pine forest, Dr. Kenneth Hunt, the Director of Glen Helen, and Alan Woog, a forestry graduate from the University of Michigan, established the Bryan School Forest in 1949.

In subsequent years, high school students and Yellow Springs residents planted hundreds of pine trees on a parcel of land adjacent to the pine forest and John Bryan State Park. Over time, hundreds of those trees were harvested by the students and sold as Christmas trees to local residents. The school forest proved to be both a profitable and sensible way to prevent further indiscriminant cutting in the pine forest.

By the 1990s the pine forest was visibly in decline — well short of its 100-year potential life span. The canopy was thinning, needles were yellowing, and most of the trees had stopped growing. These were all symptoms of chlorosis, a degenerative disease often found in trees rooted in alkaline soil. As if that wasn’t bad enough, the pine forest suffered a major blow on Sept. 14, 2008, when Hurricane Ike, packing 75 mile an hour winds, slammed into southwest Ohio.

“The white pines were in the process of dying off and then the hurricane came through,” Boutis said. “And a bunch of them had their tops knocked off which really changed the feeling of being out in that pine grove because that let a lot more sun down to the lower levels.”

These days the healthiest trees in the pine forest are the Norway spruces, according to Boutis. But unfortunately, the loss of so many white pines to the storm dramatically changed the character of the pine forest.

“The Norway spruce trees have short needles — more like Christmas trees,” he said. “Their branches come all the way down to the ground, and they have a scruffier look.”

Boutis said that when people think about the pine forest and how it once was they’re remembering the white pines with their long, soft needles.

Regarding the future of the forest, Boutis has been talking to members of the School Forest about playing a more dynamic role in maintaining the pine trees. By planting a few extra trees each year, it might be possible to build a range of ages for the trees within the pine forest. However, Boutis concedes that there is only so much one can do about the fact that soil conditions in the Glen are simply not right for pine trees.

But when it comes to education, Boutis thinks there’s an upside.

“I like the idea of being able to show people what a pine forest would look like if we were in Wisconsin or Pennsylvania or upstate New York or some of the areas where you would find native groves of conifers.”

But George Bieri has a much different perspective.

“There’s no point in restoring the pine forest,” he said. “It’s a non-native plantation, and it doesn’t create a useful habitat for our flora and fauna. Now it’s getting invaded by native trees, and eventually those will do fine.”

After working as the Glen’s land manager for 11 years, Bieri has clearly developed a close connection to its trees, trails and streams.

“Don’t underestimate the life force in the natural cycle,” he said. “A tree that’s planted by the higher power in nature is going to have a higher life force and be more robust than one planted by a human being.”

Bieri said when it comes to projects like the one that initiated the pine forest, people need to be humble about mimicking nature.

As he reflected on the legacy of the pine forest, Nick Boutis offered a balanced perspective.

“To the extent that people have come to think of the pine forest as one of the most spiritual and sacred places in the area, I’d say it was a success,” he said. “And to the extent that they planted a forest that can’t survive without active management, I’d say they had some things to learn.”