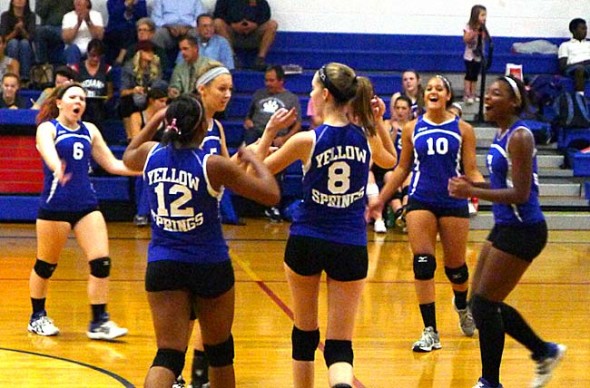 In a season where they found a way to win 16 times in 20 matches, the varsity volleyball players demonstrated a level of determination, skill and teamwork long missing from the struggling YSHS volleyball program. The result was that just three years after the varsity team went winless at 0–11, the Bulldogs finished their season as Metro Buckeye Conference runners-up with a 16–4 overall record and three victories over Division I teams.

Even for a team of such fierce competitors, the prospect of going into Division I Fairborn on the Skyhawks’ senior night and getting a victory was a stretch. But on Sept. 26, the Division III Yellow Springs High School girls’ varsity volleyball team, down 4–10 in the third set after losing the first two, rallied to defeat Fairborn in five sets.

The Fairborn victory was significant, but not aberrant. In a season where they found a way to win 16 times in 20 matches, the varsity volleyball players demonstrated a level of determination, skill and teamwork long missing from the struggling YSHS volleyball program. The result was that just three years after the varsity team went winless at 0–11, the Bulldogs finished their season as Metro Buckeye Conference runners-up with a 16–4 overall record and three victories over Division I teams.

“Our team wanted to win, and we did,” said senior middle hitter and defensive specialist Emma Peifer of the difference this year. “Most of us are pretty close on and off the court…so we trusted each other.”

Senior Maryah Martin, a setter and right hitter, said it was the will to win — and the hard work to do it — that made the team so good.

“We had so many determined players that wanted to win every single game,” she said. “We put in the effort during the summer and we kept playing as a team.”

And by all accounts, the season was a success, even though the Lady Bulldogs lost their first tournament game last Monday, a nail-biting five-set defeat at the hands of Mississinawa Valley. Second-year coach Lindsay Kerns was disappointed, but not defeated.

“It was a tough loss but we played great and they had fun,” Kerns said. “If we had to go out, this was the best way to go.”

Kerns herself could get some of the credit for turning around the program. In her first year as head coach, she took a team at the bottom of the MBC with a losing record and led them to finish .500 with 11 wins. For that feat, she was awarded the MBC Coach of the Year in 2011. This year, she earned the honor once again. Kerns said she and eighth-grade coach Chris Linkhart taught their players that “it’s okay to want to beat teams.” And according to players, even though Kerns was pregnant throughout the season, she still put together well-planned practices and was determined to instill in her players a winning attitude.

“She really wanted us to win and be successful,” Peifer said. “I learned a lot from her from a volleyball perspective but also that in life if you put your mind to something, you can make things work.”

Kerns found other ways to help her players improve. She secured a $2,000 grant from YSI, Inc. for uniforms and to send her players to a summer camp. And she enlisted the assistance of Paco Labrador, the NCAA Division III girls’ volleyball Coach of the Year. Labrador, who led his Wittenberg Tigers to a NCAA championship last year, also happens to live in Yellow Springs, and was more than happy to help out his hometown team. Labrador taught special clinics, hosted the team at an annual high school camp at Wittenberg and ran a satellite camp just for YSHS players for the last two years.

Compared with the team he saw a few years ago, Labrador said that this season YSHS volleyball players knew what they needed to do on both offense and defense, were a lot sharper and more disciplined, had better ball control, and minimized errors. But the biggest change he saw was in teamwork and communication. The girls had great chemistry, he said.

“They looked like a together team,” Labrador said. “If a team looks together, they look like they’re enjoying themselves and are invested 100 percent in what they’re doing there. Some teams look like six individuals, others look like a family.”

Labrador also pointed to Kerns’ role in changing the culture of the YSHS volleyball program.

“What Lindsay brought was a degree of accountability,” Labrador said. “She really heightened that expectation, that if you’re going to be on this team, you have to invest the time and you have to commit to it.”

But an exceptional group of players also deserve credit for their season, including four stand-out graduating seniors — Peifer, Martin, outside hitter Angela Allen and middle hitter Maya Hardman. This year, Peifer was selected to the MBC first team and Hardman made the second team. Hardman also won the league Coach’s Award, given each year to an outstanding student-athlete.

“We’re obviously losing big leadership as all of those girls have been on the team since their freshman year,” Kerns said of the seniors. “They set the pace, but they trained the girls below them well.”

Kerns is optimistic about next year, with junior setter Hannah Brown, freshman setter and hitter Meredith Rowe and junior outside hitter Kennedy Harshaw all returning. Harshaw was selected to the MBC first team this year and finished second in the conference in both kills and kills per game. Plus the eighth graders who won back-to-back MBC titles in middle schools will be coming up.

“I think we can be just as good,” Kerns said.