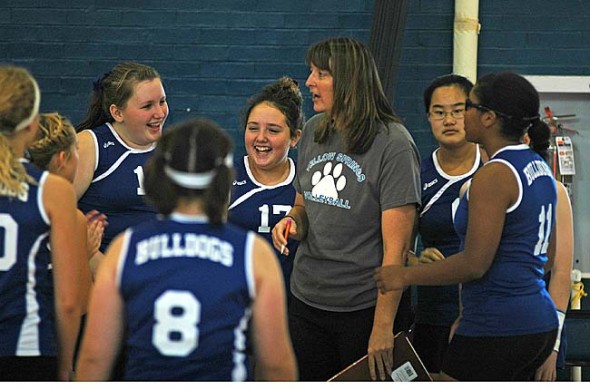 McKinney eighth grade volleyball Coach Chris Linkhart pumped up her team during a timeout at its match against Dayton Christian last week. After going undefeated as seventh graders and dominating this season with a 9–2 record, the talented and tightly-knit team looks to win another conference title this weekend. Photo by Megan Bachman

The McKinney School eighth grade girls volleyball squad isn’t used to losing. So when the players faced their first competitive loss to Troy Christian last week, after going undefeated as seventh graders and starting out the year 3–0, Coach Chris Linkhart didn’t know how they’d react. But not one player cried, and at practice the following Monday the team came up with ways to improve.

“They needed to lose really,” said Linkhart of that fateful match. “They needed that taste, and it made them hungrier.”
Now the team, at 9–2, has its sights set on a Troy Christian rematch en route to a second straight conference trophy. It’s an accomplishment clearly within the grasp of an exceptionally talented group of athletes, but one that would have seemed impossible just a few years ago, when the Yellow Springs volleyball program was in disarray.

And while Linkhart points to the athleticism and determination of her players as factors in the team’s success, others might point to Linkhart, who became the Yellow Springs High School varsity coach four years ago and began to turn around a losing program.

“When I first came there was no discipline,” she said. “At the high school they taught just how to get the ball over the net. They weren’t taught how to play the game. We changed the mindset.”

Linkhart expected more from her players, even when she began coaching the seventh grade team. She taught them how to bump, set and spike, drilled them in serving technique, had the varsity girls serve at them during practice and didn’t allow any negative comments among teammates. And she rewarded hard work.

Linkhart’s methods have paid off. The seventh grade team went undefeated at 8–0 last year, and swept the Metro Buckeye Conference tournament with victories in straight sets. Meanwhile, at the varsity level, the Lady Bulldogs now sit in second place in the MBC with a record of 13–3 after steady improvement in recent years from a winless (0–11) season record in 2009. At the helm of the varsity squad is Coach Lindsay Kerns, who Linkhart helped recruit to the Yellow Springs program.

But Linkhart, above all, credits the eighth grade team’s raw athleticism — she has swimmers, gymnasts, dancers, basketball players and more — and their commitment to volleyball. Many of her players spend their summers playing on club teams or attending volleyball camps and are already looking for ways to play during the next off-season.

At a tri-match last weekend, the eighth grade team handed swift defeats to Dayton Christian (25–16, 25–7) and Xenia Christian (25–21, 25–13), a match in which the Lady Bulldogs never fell behind. During the matches the players employed their new skill of attacking from the back row, pumping up their kills stats. Elizabeth Smith had 21 points during the Dayton Christian match, including 13 aces, while Gracie Wilke also dominated behind the service line with seven aces and 10 points.
In the second match against Xenia Christian, Julie Roberts played great at the net and Aliza Skinner subbed in with some beautiful serving, according to Linkhart. Kasey Linkhart, the coach’s daughter, led her team in points with seven. Roberts had three blocks, Olivia Chick claimed 4 points, Smith, 5 kills, and Danielle Worsham (3 kills) also played well.

“The eighth grade did a fantastic job on Saturday,” Linkhart said, adding that even though they seemed a little nervous, “they were ready to play after losing to Troy Christian the week before.”

The eighth grade girls volleyball team will vie for the MBC title on Saturday, Oct. 6.