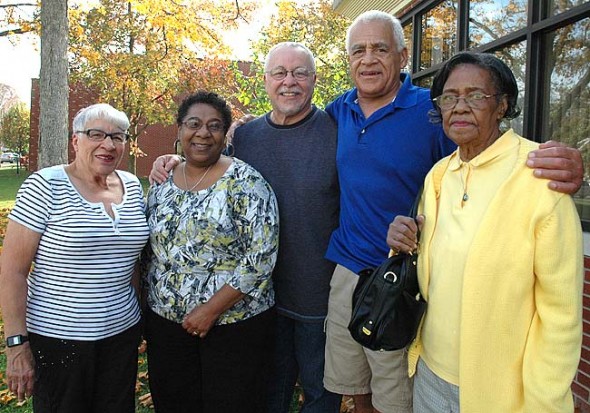 A panel of native Yellow Springers will discuss the significant role African Americans have played in the making of Yellow Springs and other issues at a free forum on Monday, Oct. 29, from 7 to 9 p.m. at Antioch University Midwest. From left are panelists Betty Ford, Sharon Perry, David Perry, Kingsley Perry Jr., and Isabel Newman. (Photo by Megan Bachman)

Growing up in Yellow Springs in the 1950s and ‘60s, Sharon and David Perry knew which places were off-limits to black people — there was the drugstore with a lunch counter where Glen Garden Gifts now stands, and the restaurant at Xenia Avenue and Glen Street. Sharon remembers when she was called the “n” word by a classmate, and being told by a friend that she was the first black ever invited into their home. Racial prejudice existed then, as it does now, in Yellow Springs, according to the Perrys, grade school sweethearts who married and returned to the village in 1994.

“Back then I was kind of surprised that there was prejudice in Yellow Springs,” said Sharon Perry, now 64. “I thought it was this fantasy land.”

At the same time Yellow Springs has long been a bastion for racial tolerance and progressiveness. Sharon’s family, the Glenns, moved to Yellow Springs in the 1950s because the local bank in town was one of few in the area that gave home loans to black families. Local companies such as Vernay Laboratories and Antioch Publishing placed a priority on hiring black workers. The village had one of the first black police chiefs in the country in the 1960s and the Yellow Springs public schools integrated some 60 years before it became Ohio law.

“The exposure to black and white people, and to older and younger people prepared me to be more accepting of people when I moved away,” said David Perry, 65, of the benefits of growing up in Yellow Springs.

The complicated history of race relations in town and the significant role African Americans have played in the making of Yellow Springs are a few of the issues that a panel of Yellow Springs natives will address at a forum on Monday, Oct. 29, from 7 to 9 p.m. at Antioch University Midwest. The event, “The Elders Speak: Being Black in Yellow Springs,” is free and open to the public and is sponsored by the 365 Project, whose goal is to spark courageous conversations locally about African-American heritage and culture.

“It’s important that we remember how Yellow Springs became Yellow Springs,” a history in which African Americans had a major part to play, said John Gudgel, a member of the 365 Project. Gudgel helped chose panelists with deep roots in the community to reflect on how the village has changed over the decades and what the community faces today.

“People speak of Yellow Springs as diverse, and we are diverse in thought, but for African Americans Yellow Springs is not the attractive place that it once was,” Gudgel said. According to the 2010 census Yellow Springs now has 40-percent fewer people of color than in 1970.

Joining David and Sharon Perry on the panel are Kingsley Perry Jr., Isabel Newman and Betty Ford. Newman, 86, is a descendant of Wheeling Gaunt, who famously bought himself and his family out of slavery in the 1840s and later became a wealthy local landowner. Ford, 85, also comes from a well-known Yellow Springs family, the Cordells. Ford’s grandparents owned much of the property around Antioch College, including where the Antioch Inn and the Antioch Library now stand.

In fact, Ford, who grew up poor, said that she could not have afforded to live in Yellow Springs if it hadn’t been for her family’s property.

“The population has gone down with Afro-Americans because I think Yellow Springs is a very expensive place to live and if you don’t already own property, moving into Yellow Springs is very difficult,” said Ford, who remembers when building lots sold for just $500. The Glenns’ first Yellow Springs home cost $9,900 in 1955, according to Perry.

In addition to high housing prices, the lack of jobs in town may be another reason the African-American community fell from a quarter of the population in 1970 to just 12 percent today (in addition to 7 percent that now identify as “two or more races”), according to the Perrys. Both Sharon Perry’s parents worked stints at Vernay. Her first job in town was as a relish girl at the Antioch Inn, then a fancy restaurant, while her future husband worked at Antioch’s Behavioral Research Project, feeding the monkeys and rabbits used for scientific experiments. Newman worked for 48 years for Ernest Morgan at the Antioch Company, who sent her to New York to learn how to run a linotype machine. In other places at the time, similar opportunities weren’t available for black people.

The consequences of the black population’s decline can be felt all over the community, but one visible area is the loss of many black-owned businesses. The Perrys remember the proliferation of such shops downtown, including Hawk’s Shoe Shop, Stagner’s Cleaners, Burke’s Barber Shop and Jake’s Party Store.

The two predominantly black churches in town — Central Chapel AME and the First Baptist Church — have also taken a hit, they said. Then, the congregations were larger and more active with frequent picnics, teen programs and choirs. Ford remembers fondly the evening moonlight church picnics, which families would attend together. Today, she laments, people are more individualistic. Sharon Perry agrees.

“Yellow Springs has become more bourgeois and people don’t seem to be as close to each other,” she said. “Everyone is just doing their own thing.”

Gudgel, who grew up in Yellow Springs in the 1970s sees that Yellow Springs is not as vibrant, self-sustaining and tolerant of different viewpoints as it was. Villagers, especially the younger generation, he said, need to remember the town’s history, and honestly look at its present, to understand the community.

“We’re still an open, tolerant community [in terms of racial or lifestyle differences] but we’re less tolerant of people’s views on issues,” Gudgel said. “It’s disheartening to see that level of antagonism.”

Gudgel said he hopes that at next week’s forum there will be an open discussion where many diverse perspectives are aired. For the 365 Project, it is just one in a series of many to come.