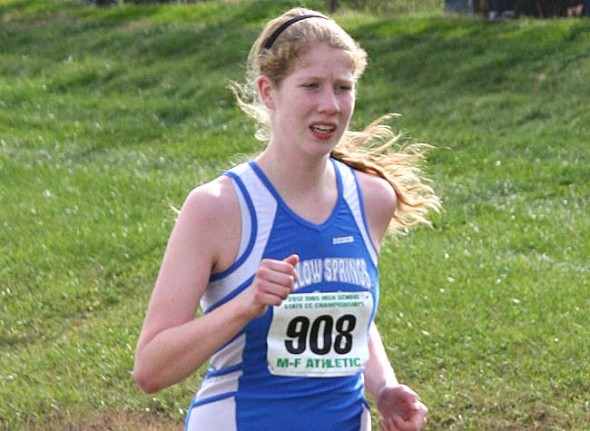 In her last race as a Bulldog, Yellow Springs High School senior cross-country runner Lois Miller set out to finish with a personal best, but ended up making history. At the state finals on Saturday, Nov. 3, Miller demolished her career 5k record of 19:33 and the YSHS female cross-country record of 19:21 on her way to a blazing 19:12.27 finish. She ran faster, and finished better, than any previous Lady Bulldog in school history, as she came in 21st place out of the top 141 runners in Ohio.

Coming into the state finals, Miller had momentum. At districts, she ran her fastest race ever, in 19:33. At regionals, she received a medal for a fifth-place run, in 19:44, which sent her to the state finals, held at the National Raceway in Hebron, for the second time in three years. As a sophomore running at states, she placed 43rd in 19:52.

Hoping to improve on her previous state performance, Miller looked nervous, yet calm and confident at the starting line, according to YSHS cross-country coach Vince Peters.

“Like an experienced pro, she went through all the steps while waiting out the seemingly endless minutes before the start,” wrote Peters, Miller’s running coach of 10 years, in an email. “Having such an established routine makes it a bit easier to handle the massive amount of nervous energy fluxing thru the body.”

Miller kept to her game plan and stayed with the lead pack through the first mile, crossing the timing mat in 5:47. By the second mile, she was in 16th place and, according to Peters, obviously tiring, but holding her own. When the race wound its way into the woods, Miller, who often runs 10-mile jaunts through John Bryan State Park, had an advantage and moved up to 15th place. But the final 800 meters became an all-out sprint for medals, and though Miller ran at a fast 6:15 clip, she couldn’t hold off all of her challengers.

When Miller crossed the finish line, she had accomplished something no previous Lady Bulldog had. The 17-year-old school record of 19:21 that Anita Allen established in 1995 was broken. And Miller’s 21st place finish surpassed Swalla Abrams’ 31st place finish as the best-ever finish by a Yellow Springs runner at the state meet. To Peters, only one thing could be said about Miller’s performance: