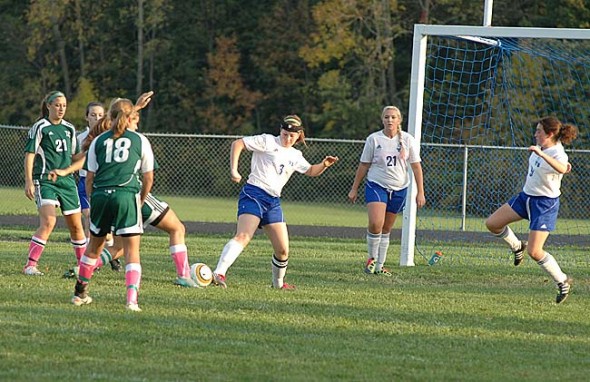 YSHS defender Keturah Fulton (center) cleared the ball away from an attacking Troy Christian forward on Oct. 4. The girls soccer team ended its season in the first round of districts in a game that came down to penalty kicks. Also pictured are, from right, Alice Miller and Ali Solomon. (Photo by Megan Bachman)

An incredible post-season run for the Yellow Springs High School boys soccer team ended last Thursday at the hands of archrival Springfield Catholic Central. The fighting Irish scored within 30 seconds of the opening whistle, breaking the Bulldogs’ spirit and beginning an insurmountable 4–0 deficit from which YSHS couldn’t come back.

“They were just a stronger team that day,” Yellow Springs Coach Ben Van Ausdal said. “They were more prepared than we were, they were much faster, and when you let in a goal in the first 30 seconds, your head goes down.”

Earlier in the season, YSHS lost to Springfield Catholic Central 2–0. It was one of only three losses in a 11–3–1 campaign that ended with a Metro Buckeye Conference championship. Van Ausdal, the MBC Coach of the Year, said he was pleased with the season, especially after graduating star soccer player Jacob Trumbull last year.

“We were really young and I didn’t expect us to go this far,” Van Ausdal said. “But I’m really happy with the results and with the kids.”

One player who filled in Trumbull’s cleats was Jared Scarfpin, a sophomore who was selected to the all-district first team and nominated to the all-state team. Scarfpin, a sweeper, was “all over the field,” Van Ausdal said, helping out both the offense and the defense during games. He assisted on the lone goal that put YSHS into the district finals, a beautiful shot by Gage Miller against Watkins last Monday.

Forward Ian Chick and goalie Eric Lawhorn were selected to the second team all-district, and Levi Perry and Eli Biggs to the third team. MBC first team awards went to Scarfpin, Chick and Lawhorn. Perry, Biggs and Grant Reigelsperger were selected to the MBC second team. And the conference sportsmanship award was given to Gabe Rehm. Seniors Biggs and Perry will play in the all-star east game, coached by Van Ausdal.

Reflecting on his team’s success, Van Ausdal said it was the close bond between players that helped them go far.
“It’s a unique team,” Van Ausdal said. “Usually there are little cliques, but no matter whether you’re a freshman or senior they always worked together and they never complained about another player. Coaches dream of having a team like this.”

The YSHS girls soccer team ended its regular season on Oct. 11 with a tough game against Miami Valley on fast-moving field turf. Throughout the game, senior Lotte Mulder provided opportunities for forwards Ayeshia Allison and Kara Edwards to run onto the ball, and Lucy Callahan made successful runs through the Miami Valley defense to create several shots on goal. But a talented Miami Valley offensive found the net in the first half and led at half time.

In the second half the Lady Bulldogs defense, led by Keturah Fulton, Paloma Wiggins, and goalkeeper Hypatia McLellan, kept the Rams to one goal. But Miami Valley finished the game with nine goals to the Lady Bulldogs’ zero. The final season record was 0–14–0.

Then, at the district opener against Southeastern on Oct. 17 and 18, the Lady Bulldogs had one of its best collective efforts all year and an outstanding game by freshman keeper Ashley Longshaw. Twelve minutes into the game sophomore Edwards received the ball through the Southeastern defense for a breakaway, but the keeper got in front of the shot. Edwards and Callahan came together for five more shots on goal but were unable to find the back of the net. The game was scoreless at halftime.

Southeastern came out with renewed effort in the second half. Bulldog defenders Alice Miller, Ali Solomon, and Ursula Kremer kept Southeastern forwards to the outside to keep shots to a minimum. Midfielders Isabella Long, Emma Romohr, and Jesi Worsham pressured the ball in the middle, allowing Fulton to dribble up the sideline and make a ground cross to the far post, where Kara Edwards scored with 23 minutes left in the game. The Lady Bulldogs did not let up and held a tight defense until a penalty kick was awarded to Southeastern with under 10 minutes left in the game. Southeastern converted the PK to tie the game. Both teams played hard to the final whistle, but the game remained tied at 1–1.

Despite falling darkness the teams went into sudden death overtime. YSHS came out hard and had two quick opportunities at goal, but both teams were unable to find the net. In an anticlimactic end to the day, the game was to be continued the following evening. The next day the Lady Bulldogs returned to Southeastern for the final 15 minutes of overtime. Both teams took the field ready but were unable score. The Bulldogs then became the first YSHS girls soccer team in history to go to shoot outs in post-season play. The Lady Bulldogs took their kicks confidently but the Southeastern keeper saved two and Southeastern emerged victorious.