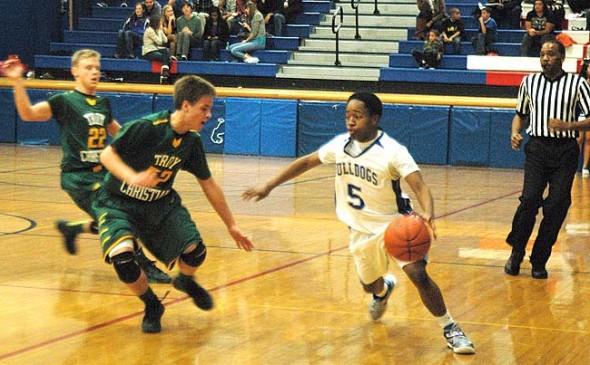 Guard Bryce White made a move on a Troy Christian defender during the YSHS boys basketball team’s 67–47 loss at home on Friday. The defeat put somewhat of a damper on a week in which the Bulldogs beat Jefferson at its home court for the first time in YSHS history. (Photo by Megan Bachman)

After winning a historic victory at Dayton Jefferson early last week, the YSHS boys varsity basketball team suffered a disappointing loss to Troy Christian in its home opener. Their record is now 2–2.

YSHS jumped all over Jefferson from opening tip-off to come out to a 24–7 lead at the end of the first quarter. They upset Jefferson, at the time the number three Division IV team in the Dayton area, by a final score of 68–55. No YSHS boys basketball team since the rivalry began in the late 1970s has won at Jefferson, according to John Gudgel this week.

Though the Bulldogs maintained a lead the entire game, during a key Bronco run to cut the lead to nine, underclassmen Liam Weigand, Bryce White and Isaiah Taylor each hit a three-point shot to keep Jefferson at a distance. Jared Scarfpin added six points and some key free throw shooting down the stretch and Eric Lawhorn logged solid minutes on defense. Weigand finished with five points, Robbie Jones and Wesley Moultrie had eight points, PJ Russell added 11 points and some stellar defense and Roland Newsome finished with game highs in rebounds (17) and points (23).

Hosting the number five Troy Christian Eagles on Friday, the Bulldogs came in ranked number three, but “didn’t show up,” according to Coach Brad Newsome. In front of a packed home crowd, YSHS gave up some early baskets before pulling even in the first half. But the young Bulldogs couldn’t keep up with the fast pace of the visiting Warriors and lost 67–47. Newsome led with 19 points, Russell added 16 and Jones and Taylor each contributed four.

In back-to-back meets this weekend, the YSHS swim team earned several top-10 performances. For the girls team, returning swimmer Zoey McKinley finished in ninth place in the 200-meter freestyle in 34.69 at the Shawnee Invite while fellow veteran Rachel Meyer took ninth in the 500-meter freestyle with a time of 7:21.27.

The season started on a high note for the McKinney eighth-grade girls basketball team. They crushed Belmont 33–4, with Elizabeth Smith scoring 15 of the team’s points and Julie Roberts and Olivia Brintlinger-Conn adding four apiece. Later in the week the team failed to keep visiting Emmanuel Christian off the scoreboard and lost, 46–23.

“They started off the game too slow and even though picked it up towards the end, it was too late,” Coach Evin Wimberley said of her team’s efforts. Smith scored 16 points in the loss, Maya Creighton had five and Annabel Welsh rounded out scoring with two points.

While the seventh-grade girls basketball team played well in it its home opener against Emmanuel Christian, they turned the ball over too often, losing 17–14. Gracie Bryce scored 10 points on the night and Elle Peifer and Amani Wagner added two points apiece.