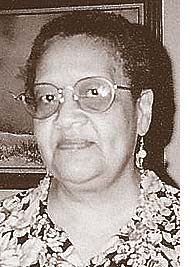 Evelyn A. Hill, faithful servant of God, died on Sunday, Dec. 9, after a lengthy illness. She was 75.

Evelyn graduated from Bryan High School in 1955 and attended Capital University for one year. Her first job was with Arthur Morgan at Community Service. She later worked at Olive Kettering Library at Antioch College, holding various jobs. Evelyn retired as library secretary at Antioch College in 2006.

Service for Evelyn Hill will be held Saturday, Dec. 15 at 6 p.m. at First Baptist Church in Yellow Springs. Visitation will be held from 4 p.m. until start of service. Reverend William Randolph will officiate and Reverend Milk Barnett will serve as eulogist. Interment will be held on Monday Dec. 17 at 10 a.m. at Glen Forest Cemetery. Services entrusted to Porter-Qualls-Dunlap Funeral Home.