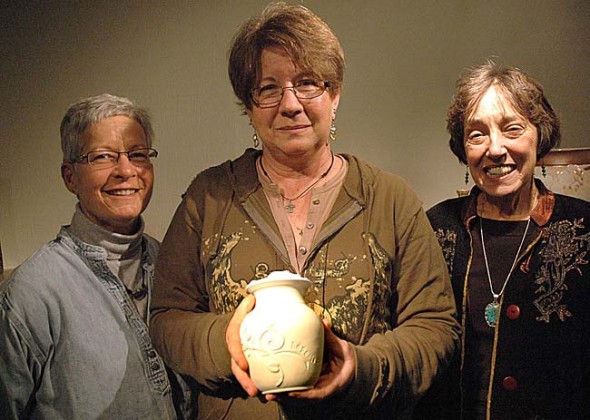 John Bryan Community Pottery members, from left, Carol Culbertson, Lynn Riewerts Carine, and Cindy Butler-Jones, designed and crafted a memorial urn for an Arkansas baby born with a severe birth defect. They worked free-of-charge to honor baby Hope, who lived for just 28 hours after she was born in October. See photos of the finished urn below. (Photo by Megan Bachman)

Born with a severe brain defect in an Arkansas hospital, baby Hope lived for just 28 hours while her healthy twin sister Journey survived. Seven hundred miles away in Yellow Springs, three potters were commissioned to create a memorial urn for Hope and spent six weeks designing and crafting her final resting place. Such was the larger-than-life impact of the tiny 3-pound, 3-ounce baby, who taught her family to cherish life’s preciousness while enabling a rare collaboration among local potters.

“The family really needed something to bring them together, and it ended up bringing us together,” said Lynn Riewerts Carine of Medway, one of the John Bryan Community Pottery members who worked on the urn.

None of the potters had ever met Hope’s mother, Jenny Mingus, but their gratis efforts helped heal her grief three states away.

In a phone interview, Mingus said of the ceramic urn: “It’s one of a kind, just like Hope was one of a kind. I was so relieved not to have something off of a shelf … but something that’s handmade. It’s beautiful. It’s her final resting place.”

In October Mingus’ older sister Jackie Anderson, a former Yellow Springer who now lives in Dayton, emailed John Bryan Community Pottery about designing an urn for her niece, whose prognosis was grim.

This week Anderson picked up the small porcelain piece from the pot shop and will soon send it to Cabot, Arkansas, where Mingus lives with her husband and four children. The urn is decorated with intertwining vines, one set in recess and the other in relief, which form a heart shape. They represent the twins. So does the pair of doves wrapped around each other on the urn’s lid. The potters chose porcelain, a pearl white clay for the piece, which Yellow Springs potter Cindy Butler-Jones said also had meaning.

“It’s small, feminine and delicate but sturdy and strong”, said Butler-Jones, who handcrafted the lid.

That the local artists could console a mother with their craft was one of many heartening outcomes of such a heartbreaking situation. Another was that Hope’s fraternal twin did not have the defect, and is healthy at six weeks old. And while Hope lived for only a day she made an impression on all of those who knew her. 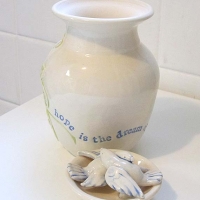 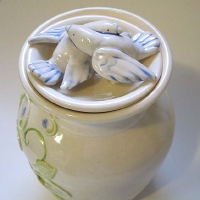 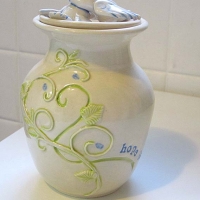 “Hope taught us what really matters, what’s really important,” Mingus said. “I don’t stress out on small things … the things that matter in life are people and all you need is love.”

In the summer as a fetus in utero, Hope was diagnosed with the most serious form of holoprosencephaly, in which the brain fails to divide into separate hemispheres. According to Anderson, about 90 percent of babies with the defect don’t make it to term, and those that are born only typically live a few minutes or hours. The family was devastated by the news, and Anderson began to think about something to ease the pain.

“One of my first thoughts was I did not want my sister to have to shop for an urn for her baby,” Anderson said. “I wanted to make something for her.”

The day after she emailed to John Bryan Community Pottery, pot shop manager Allison Paul called her and told her she would see if any potters were interested. Three stepped up when they saw they could use their artistic skills for healing.

“I was interested mainly that we use our talent for someone that’s hurting,” said Carol Culbertson of Enon, who created the vines. “It’s so wonderful using talents that you have comforting someone else in a really sad time.”

Butler-Jones volunteered, having previously created urns for a deceased friend and cat. And Riewerts Carine, who was expecting a grandchild at the time, also wanted to help. She threw the piece using a potter’s wheel. Culbertson added the decorative flourishes, which also include a French proverb — “Hope is the dream of a soul awake” — while Butler-Jones brought expertise and the skill to mold a lid that would fit after firing. Anderson also helped in the design and creation.

“[The potters] were very loving throughout the process,” Anderson said. “They were kind … and perfectionist on my niece’s behalf. The urn was created with a lot of love from the universe.”

It was during a design session in October that Mingus called her sister to tell her she had gone into labor. Anderson hopped on a plane and at 2:26 a.m. on Oct. 31 watched Mingus give birth to Hope while she held Journey, who was born 5 pounds, 8 ounces, six minutes earlier in her arms. Hope came out a blue-gray color and with a faint heartbeat of just 25 beats per minute. But soon Hope, who had a severely cleft pallet as a result of the defect, turned pink and opened her eyes.

“We loved her back to life,” Mingus said of the moment. “That little girl filled an entire room with her eyes. Her spirit and her awareness demanded the attention of everyone around. She was a bright little soul.”

When Hope died the following day, family members were crushed, but grateful for the short time they had with her. Anderson also learned from the experience.

“What Hope taught me is there is so much more intentionality to living than we can wrap our minds around,” Anderson said. “I hope that each of the bits of my walk through this world will be more intentional. I’m grateful to be part of her story.”

The potters who donated the time and materials to make the urn said the project was a labor of love that they were more than happy to undertake. And they enjoyed collaborating, which can be difficult for potters, and artists in general.

“Not one of us has an ego that interfered with it,” Riewerts Carine said. “We thought, if we collaborated, we could bring together different aspects of our talents.”

For more information on holoprosencephaly and to donate to a charity for children with the disease, contact the national nonprofit organizations Now I Lay Me Down to Sleep and Families for HoPe Inc.

One Response to “Potters’ urn honors a tiny, brief life”