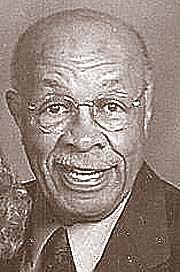 Ted was born in 1925 in Mansfield, Ohio to Thompson and Mildred Alexander Jackson. He graduated from Mansfield High School and lived briefly in Milwaukee, Wis., before entering the Army. He served during World War II in both the European and Pacific theaters. After World War II ended, Ted returned to civilian life and began his civilian career at Wright-Patterson Air Force Base, where he received several awards and commendations before retiring in 1981.

Following his retirement from WPAFB, he was employed as a counselor with Greene County Golden Age. As a community activist, Ted served on the Community Nursery School Board for several years as treasurer, the Yellow Springs Planning Commission and as a charter member of the James A. McKee Association. He was a life member of the American Legion John Roan Post 517, and a life member of the NAACP. Ted was also a volunteer and strong supporter of The National Afro-American Museum and Cultural Center in Wilberforce.

Known affectionately as “T.J. the D.J.,” music was a central part of Ted’s life. In the military, he played alto saxophone in the company band, providing entertainment for officers, servicemen and women. As a faithful member of Central Chapel AME Church, he was a mainstay in the tenor section, and continued singing and humming even as his health declined. In addition to singing in the choir, Ted served in Central Chapel as a trustee, chairman of the fundraising committee, treasurer, steward and president of the male chorus.

Ted is survived by his loving wife of 64 years, Phyllis Lawson Jackson; one son, Kevin (Jacquise) Jackson of Dayton; one daughter, Kimberly Jackson, of Oak Park, Ill.; one brother, Paul (Cherry) Jackson, of Saratoga, Calif.; two grandchildren, Derick and Jason Jackson; one great grandchild, Kingston Jackson and several nieces, nephews and cousins and many dear friends. He was preceded in death by his parents, brothers Clarence and James and sisters Lucille, Cora and Elizabeth.

Services for Theodore Jackson were held on Saturday, Jan. 12, at Central Chapel AME Church. Internment followed in Glen Forest Cemetery in Yellow Springs, with arrangements made by the Porter-Qualls-Dunlap Funeral Home, Springfield.