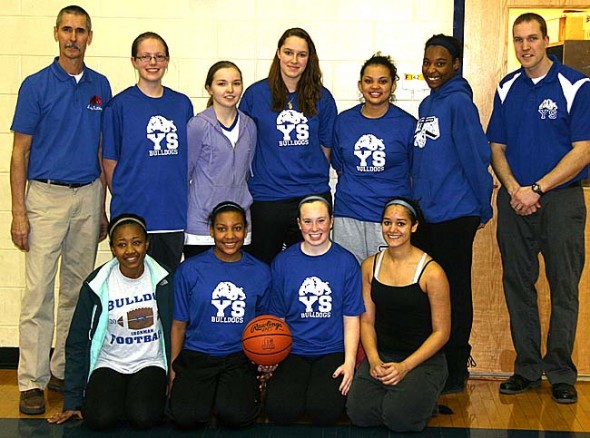 It’s been a season of firsts for the Yellow Springs High School girls varsity basketball squad, and this week was further proof that this year’s team is like few others in the school’s history. After winning the YSHS girls’ first Metro Buckeye Conference Championship earlier in the month, on Saturday, Feb. 23, the Lady Bulldogs nabbed the Division IV Brookville Sectional title by smoking Cincinnati Seven Hills 44–24 at Monroe High School. The last time the YSHS girls basketball team won the sectional was 1987.

“The kids really wanted this one,” Coach Tim Barga said. “Winning both those in same year — it’s been a long time for Yellow Springs to win something, and it means an awful lot to these girls to get this far. We’d like to go as far as we can.”

Brianna Ayers and Maryah Martin led the game for the Bulldogs, working both ends of the court to keep just two Cincinnati shooters in check, according to Barga. Ayers shot 7 for 8 from the foul line and both led the rebounding for the game. The third and fourth quarters were extremely strong, he said.

“If we can put four quarters like that together in the next game, we might do pretty well,” he said.

Barga hopes the success of this year’s team helps “build for the future of YS basketball.”

“These girls are having a lot of fun — they’ve worked hard this year, their attitude’s been good, they listen well — if you do that and you play as a team, you’re going win some games.”

Yellow Springs heads into the District finals against Tri-Village on Saturday, March 2, at Tippecanoe High School. Tri-Village, (18–1) and the first seed in the Brookville sectional, beat Jefferson 101–22 and Emmanuel Christian 107–13 in the early rounds of the tournament. They pose a new kind of threat to the Lady Bulldogs.

The Bulldog boys varsity basketball team glided through the opening game of the Division IV Sectional on Friday, Feb. 22, wiping out the Tri-County Panthers 55–42.

The game at Troy High School was led by P.J. Russell with 14 points, followed by Wesley Moultri with 12 and Roland Newsome with 10.

Number four-seed Yellow Springs (12–7) takes on sixth-seed Arcanum (9–11) in the second round of sectional on Tuesday, Feb. 26, at 6:30 p.m., again at Troy High School. If they Bulldogs win, they play the winner of Jefferson and number two-seed Troy Christian for the sectional title on Fri., March 1, 7 p.m. at Troy, with the district finals on Tuesday, March 5, at University of Dayton Arena.