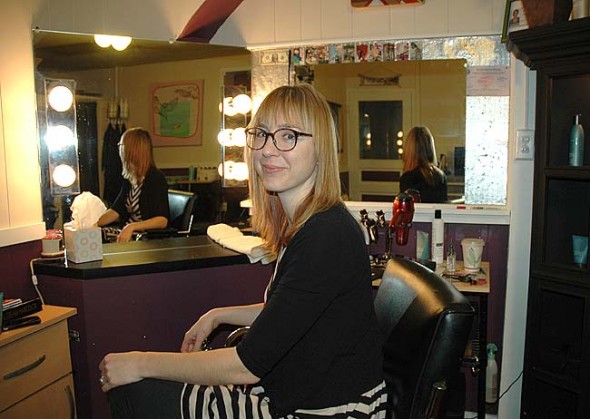 Andrea Rhodes recently opened the Sidedoor Salon, a new hair styling business located around the side of 108 Dayton St. Rhodes brings to her business 12 years of experience, including several years at Wavelength, along with a background of Reiki. For an appointment, contact her at 937-474-5169. (Photo by Diane Chiddister)

Use the Sidedoor for a new cut and style

Once, after Andrea Rhodes got a really good haircut, she was walking down the street when someone leaned out a car window and yelled, “Great haircut!”

Rhodes aims to give that sort of cut to her customers.

Since December she’s been offering her hair styling services and products in her new local business, the Sidedoor Salon. The one-person salon is located, you guessed it, through the side door of 108 Dayton St., around the corner from Design Sleep and below Yoga Springs.

Rhodes brings 12 years of hair styling experience to her business, including several years at Wavelength in Yellow Springs, where she worked before opening her own place.

“It was a great experience for me but time to move on,” Rhodes said of her previous job. Having her own salon has been a long-standing dream, and she’s thrilled to “be in control of my surroundings.”

Those surroundings include several original paintings, including a few by Rhodes and her fiance, both artists. She also has lots of greenery, and plans, when the weather warms up, to plant flowers in her windowbox. Longterm plans include having a “greenhouse salon” in her living space, complete with lots of light and plants.

But for now, she’s thrilled just to have her own place.

“For me, for anything great to happen, you have to create the space,” she said.

Rhodes brings to her work a commitment to working with her customer.

“If someone isn’t pleased with their cut, it’s usually a problem with communication,” she said. “I haven’t done too many bad haircuts. I’m a good listener.”

She also brings to her work her 20-year background with Reiki, which she believes helps her to tune in to her customers’ energy and perhaps maintain an atmosphere of calm.

Being attuned to energy from such a young age — she was 15 when she first studied Reiki — Rhodes cares deeply about what she uses on her body, and believes that others do too. That’s why she carries only 100 percent organic and sulfate-free hair products, including Surface, which includes the natural nutrients of amaranth and soy. The mother of a 14-year-old girl and a 10-month old baby, she also carries organic baby lotions and creams.

Rhodes grew up in Kettering in a family where all the women are nurses, and she, too felt pulled toward a helping profession. But “I faint at the sight of blood,” she said, so she sought another profession where she could “make people feel good. Only not in a hospital.”

She earned her cosmetology degree at Carousel Beauty College in Kettering, then apprenticed in an Aveda salon. Growing up, she and her family would come to Yellow Springs for fun, and working here was always a goal. So she was thrilled to work at Wavelength, where she considered stylist Deborah Wallace a mentor.

Rhodes left Wavelength to move to Portland for a year and when she returned to the area, resumed her job at Wavelength. But she kept her dream alive of creating her own space, and is especially excited that, as well as now having her own salon, she and her fiance recently moved to town, so she can walk to work.

She hopes that when her customers walk down the street, they too will hear people yelling compliments from car windows.

“I want them to think, ‘I should go out tonight. I really look good,’” she said.

For now, Rhodes works with customers by appointment only. To make an appointment, call her at 937-474-5169.