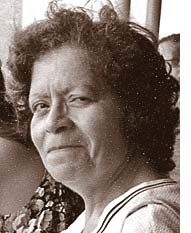 Arlette Lenore (Norvell) Crockett of Millburn, N.J., passed away Friday, March 22. She was 87.

Arlette was born Oct. 18, 1925, in Washington, D.C., in the home of her parents, Joseph M. and Daisy A. Norvell. She graduated from Armstrong High School at the age of 21, with a major in home economics. She worked for several years as a milliner, and was an accomplished seamstress and cook.

In 1948, Arlette married Albert Glenn Crockett, a graduate of Howard University in Washington, D.C., and a veteran of World War II and the Korean War. In 1954, Arlette and Albert Crockett moved to Springfield, Ohio, where he started his career as an electrical engineer at Wright Patterson Air Force Base. The marriage ended in divorce.

Arlette will be remembered for her wry wit, penetrating observation and persistence in overcoming many challenges. She was a dedicated and loving mother, who will be missed by those whose lives she touched.

Visitation will be held 10:30–11:30 a.m. on Thursday, March 28 at Mt. Zion Baptist Church. Funeral services will begin at 11:30 a.m. in the church, with Pastor Darryl Grayson officiating. Burial will follow in Clifton Cemetery.