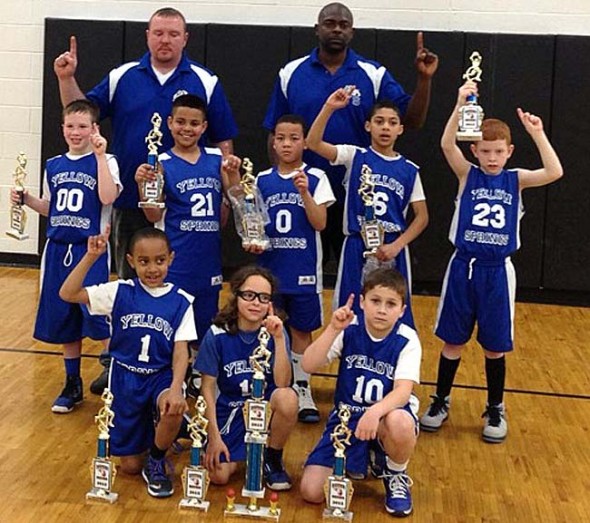 The third- and fourth-grade Bulldogs select teams both ended their seasons as Dayton Metro League tournament champions. This is the first year that Yellow Springs fielded three select teams, according to organizer Brad Newsome, and two out of the three went on to win their seasons and the tournament. Shown are, above in front from left, 4th-graders Robe Mendives, Roman Newsome, DeAndre Cowen, Dimitri Wallace and Vaughn Hendrickson. In back from left, Ty Thompson, AJ Newsome, Quentin Cole, Coach Matt Wallace and Aamil Wagner. In the photo below are third-graders, front row from left, Travis Nelson, Eli Eyrich and Cory Cordell; middle row, Ayden Rose, Marcus Mendives, Gabe Goings, Shawn Thigpen Jr. and Blake Dichler; and in back, Coaches Chuck Rose and Shawn Thigpen Sr. (Submitted photos) 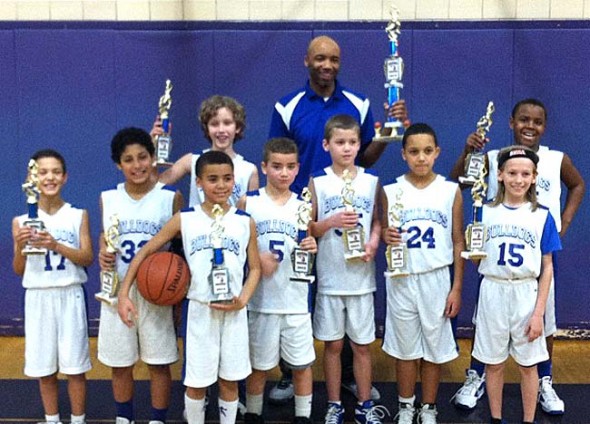 The varsity girls basketball team, going further in the season than they have in 25 years, were finally derailed Saturday by injury in their bid for the Division IV District title, according to coach Tim Barga.Up against powerhouse Tri-Village, ranked number five in the state by the Associated Press Poll, the Lady Bulldogs fell 55–31 to end a massively successful year for Yellow Springs girls basketball. Senior Maryah Martin led the team with 23 points.

“We thought we had a good chance to win” going into the game, Barga said, but when strong defensive player Brianna Ayres twisted her ankle in the second quarter, “The air pretty much went out” of the team, he said, and the Tri-Village group found the trip to the basket had become considerably easier.

While the Yellow Springs team was only down by five points at half, starters Kennedy Harshaw and Angela Allen both fouled out in the third quarter, and the team went down from there. However, Martin rallied and played “a really good strong game,” according to Barga.

Overall this year, Barga, in his second year as coach, had high praise for the Lady Bulldogs.

“There were so many games we won this year that they would never had won last year,” he said. “The kids have come so far.”

Much of that change has been attitude, he said.

The Lady Bulldogs were a tiny team ­­— only eight players, with one, Paloma Wiggins, sidelined by injury through about half the season — so they were too small to scrimmage together in practice. But several high school teachers came out to play against the Lady Bulldogs so they could scrimmage during practice, Barga said, thanking those who helped his team.

Maryah Martin was selected to the District 15 All-star team, and Kennedy Harshaw was selected as an underclassman All Star. The girls Division III and IV All-Stars will play Division II on Wednesday, March 20 at 7:30 p.m.

YSHS boys basketball blew past Arcanum 59–49 in Tuesday night’s Division IV sectional game, only to fall for the third time this year to Troy Christian in the sectional final Friday night. The score was 69–40.

Against Arcanum, Roland Newsome led the Bulldogs with 24 points, followed by PJ Russell with 17. Against Troy Christian the Bulldogs, short key player PJ Russell, were led by Newsome and Wesley Moultrie, who had 11 points each. Robbie Jones had 8 points, and Cameron Miles put up 5 points.

The team had a spirited season, beating Jefferson in December for the first time in school history, big school Cincinnati Lockland in the Bulldog Classic and playing full throttle against Troy Christian in the final game of the tournament.

Coach Brad Newsome saw a lot of personal and athletic growth in the team this year, he said, voicing pride in the hard work the players put forth.

“We grew as a team, we grew as individuals, and together we got better,” Newsome said. “I’m extremely proud of the kids — they were positive the whole year and took great pride in doing the best they could to represent the community.”

Roland Newsome and PJ Russell were selected to the District 15 boys All-star team. They will join the Division IV and III all starts in a game against the Division II all-stars on Wednesday, March 27, at 6 p.m. at Centerville High School.