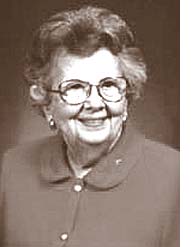 Born Sept. 25, 1911 in Madison, Mary was the daughter of Michael E. and Bess (Hampton) Garber. She was a graduate of Science Hill Preparatory School in Shelbyville, Ky., and Wellesley College in Wellesley, Mass. Early in her life, she was a legal secretary in Louisville and, after her marriage, lived in Columbus for six years. Mary was an owner and board member of The Madison Courier newspaper, which has been in the Garber family since 1849.

Mary was a member of the Madison Presbyterian Church, where she had taught Sunday school, served as church secretary and was the oldest living member at the time of her death. She held memberships in Historic Madison, Inc., where she served on the board as a docent, the Madison-Jefferson County Library Board, where she was a former president, the Jefferson County Association of Retarded Citizens, where she served on the board and was instrumental in the founding of what is now Sandstone Industries. She was also a member of Tri-Kappa Sorority, Jefferson County Historical Society and served as a volunteer at King’s Daughters’ Hospital and Hospice.

Her alert intelligence, gentle goodness and innate charm exerted an influence for good among all who knew her. She was interested in all people, enjoyed the company of her children, grandchildren, great-grandchildren and friends. She loved reading, boating on the Ohio River, playing bridge, doing jigsaw and crossword puzzles, bird watching and watching construction of the new bridge.

Survivors include one daughter, Jane Garber Wallis Jacobs, of Madison; six grandchildren, Curt Jacobs and his wife, Nancy of Madison; William Jacobs of Madison; Sally Clymer and her husband, Kevin, of Falmouth, Mass; Laura Wallis of Northhampton, Mass.; Sarah Wallis of Yellow Springs and Jessica Wallis of Boulder, Colo. She is also survived by six great-grandchildren: Connor, Ruby, Curtis and Katie Jacobs and Carolyn and William Clymer, as well as several nieces and nephews.

Mary was preceded in death by her parents; her husband, Donald R. Wallis Sr. in 1989, to whom she was married on June 12, 1939 in Madison; sons Michael Christian Wallis in 1954 and Donald R. Wallis Jr. in 2012; and three sisters, infant Caroline Garber, Bess Garber Neal and Ellen Garber Burton.

The Reverend Deborah Fortel conducted funeral services at 11 a.m. on Friday, April 5 at the Madison Presbyterian Church. Internment followed on Saturday in Springdale Cemetery.
The family requests that memorial contributions be made to the King’s Daughters’ Hospice or Historic Madison, Inc. An online guestbook may be viewed at http://www.lytlefuneralchapel.com.