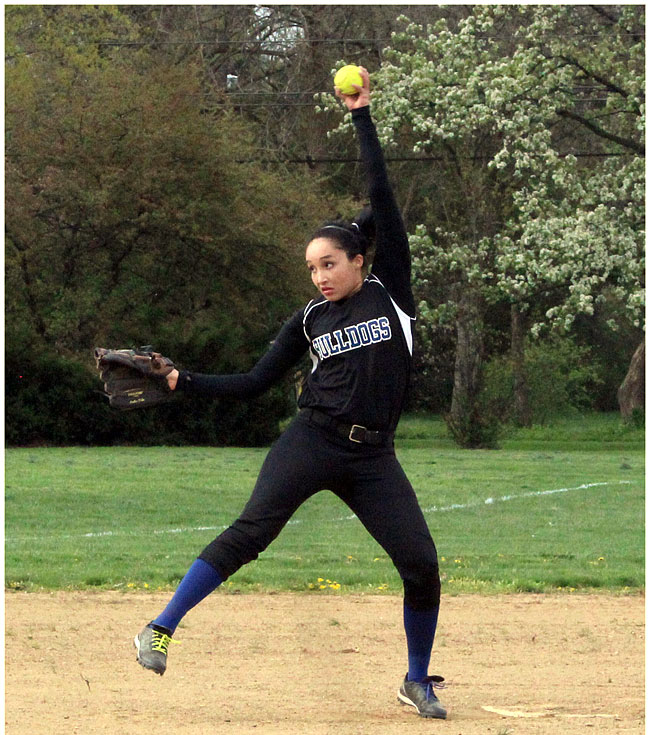 YSHS pitcher Sierra Lawrence led her team with a triple and two doubles leading to four RBIs against Emmanuel Christian this week. From the mound she had seven strikeouts over three innings and only gave up two hits. (Submitted photo by Jimmy DeLong)

The Yellow Springs High School softball team continued to improve over two games this week. On Tuesday they played their home opener versus Emmanuel Christian. YSHS fell behind early and then mounted a comeback before losing by a score of 17–7.

Junior Sierra Lawrence was the hitting and pitching star for the Lady Bulldogs. Lawrence batted 3 for 3, driving in three booming extra base hits to the outfield to the tune of a triple and two doubles. She also had four runs batted in and a run scored for the night.

“Sierra is clearly my most athletic player on the team and she proved that tonight with her extra base hits to the outfield,” Coach Jimmy DeLong said. On the pitching mound Sierra had seven strikeouts in three innings and she only gave up two hits. Sophomore Jesi Worsham also pitched two effective innings in relief for the Lady Bulldogs.

“I have the beginnings of a nice lefty/righty combination with those two pitchers,” DeLong said. Excelling at the plate were Worsham and Chelsea Horton, who combined to get on base four times and score four runs. Sophomore Modjeska Chavez had a long double over the outfielders head and Evelyn Greene was 1 for 2 with a walk, base hit and run scored.

At league undefeated Dayton Christian later in the week, YSHS again fell behind in the first inning. Lawrence, who was victimized by errors and walks in the first inning, was able to survive the inning. Later Lawrence showed she can shut down the best of teams as she finished the game by pitching three scoreless innings. Lawrence gave up no runs and no hits over the final three innings and had four strikeouts in four innings for the evening. Coach DeLong was impressed.

“Sierra really found her rhythm those last three innings and made some good plays on the mound,” DeLong said. “Being a lefty makes her harder to hit — she has 21 strikeouts in 14 innings on the mound this year.”

On the offense, Worsham continued her torrid hitting streak as she went two for three and scored the only run for the Lady Bulldogs when she got a single and stole second and third and came home on a passed ball.

“Jesi’s my leadoff hitter because she’s a fast, aggressive runner and she used that speed to literally steal a run for our team,” DeLong said. Sophomore Maddie Gueth and Chavez also contributed hits for the Bulldogs but it wasn’t enough as they lost to Dayton Christian.