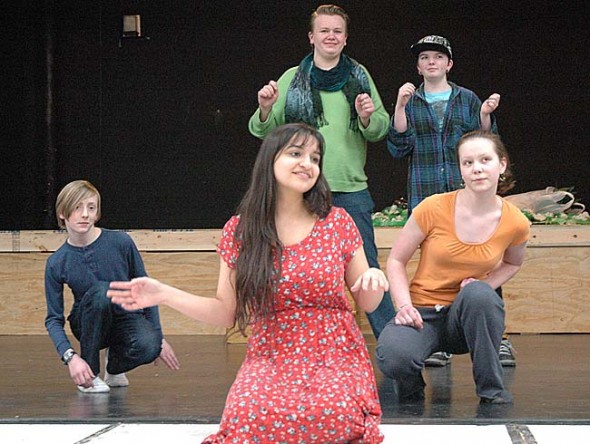 The Yellow Springs High School thespians open their spring musical, Once on this Island,  this weekend on Friday, April 12, at 8 p.m. Set in the Caribbean and drawing on the history of Haiti, the story concerns two lovers divided by questions of race and class. After Haiti’s revolution in 1791, the French colonizers were thrown out, leaving behind what director Phyllis Allen calls “long, simmering prejudices between the French descendants and the poorer black population.”

“It’s basically a happy tragedy,” said Ben Green, who plays the romantic lead and describes his character, Daniel, as a “rich mulatto man [who’s] a good guy and…loves the girl, but isn’t really willing to change” for her.

The musical is a one-act show written by Lynn Ahrens with music by Stephen Flaherty.

The original Broadway production opened in 1990, followed by a run at the West End, where it won the 1995 Olivier Award for Best New Musical. Based on the 1985 novel The Peasant Girl by Rosa Guy, the show is set in the French Antilles and includes elements of Romeo and Juliet and “The Little Mermaid.”