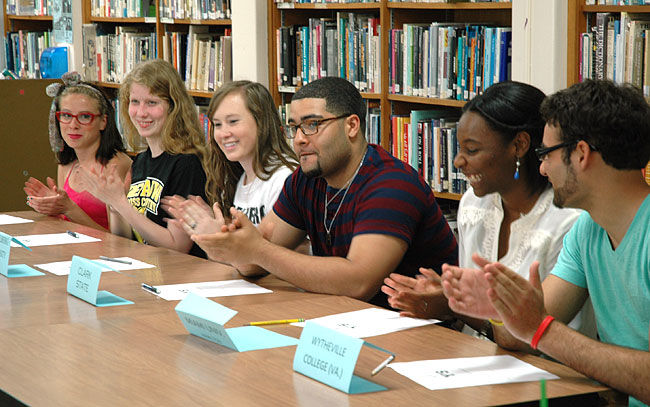 Athletes to play in college

Brown received a partial scholarship to run cross country and track at Division I Wright State. Brown chose Wright State because it’s close to home and plans to major in biology on a pre-med track. The current holder of the YSHS metric mile school record, Brown credits for her success taking the advice of track coach Vince Peters to “run scared” and her own hard work — “I practice a lot,” she said.

Allen was recruited to play volleyball by Miami University-Hamilton, where she plans to major in psychology. A multi-sport athlete, Allen also led the girls basketball team to the sectional finals this year and set the school record in the discus. In volleyball, she was part of last fall’s MBC runner-up team. Known for her powerful serves, Allen has improved markedly as a volleyball player in recent years. “I’m being smarter with how I played the ball,” she said. “I’m trusting myself and being more aggressive.”

Jones will start out playing basketball at Clark State, where he has a full ride. Jones, who plays point guard in basketball, also excelled in soccer and baseball. Having spent his early years in Springfield, Jones said he’ll play for Clark State with pride. “Putting on a jersey you’re not just playing for yourself — you’re playing for your city,” he said.

Newsome committed to Wytheville in Virginia. A guard, Newsome scored 47 points in a single game last year. He is the son of varsity coach Brad Newsome.

Miller, also the graduating class valedictorian, will run at Division III DePauw University and study math. The fastest female cross country runner in YSHS school history, Miller came in 5th place at regionals last fall before running at state, where many traveled to cheer her on. The experience was heartwarming, she said. “A lot of the team came and friends and family came, over one hour away — and cross country is not a spectator sport,” she said.

Fulton, a two-time first team all-conference soccer player, secured a partial academic scholarship
to play at the Division III Heidelberg. Fulton will study athletic training. A peak moment at YSHS came when Fulton came off the sidelines in a tournament game after a long injury to score on her first touch. It was the team’s only goal that game.

“This is a terrific group of young people,” he said. “They are all terrific leaders in their own way. All of us as a community and school have a lot to be proud of.”

Read more in the upcoming issue of the News.