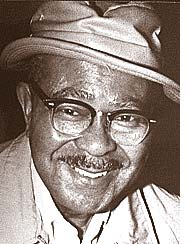 James was a wonderful father, grandfather, great-grandfather and friend. He was a long-time member and deacon at the First Baptist Church in Yellow Springs, World War II veteran and model train collector for over 60 years. For many years, James ran the “shack” at Gaunt Park, where he was known as Uncle Jim. There he enjoyed conversing with his customers when selling candy, ice cream, pop and other snacks.

He was preceded in death by his wife, Louise, and is survived by sons and daughters-in-law, Roger and Helen Johnson and Dwight and Arvella Johnson; grandchildren and their spouses, Monique and Dennis Marquardt and Ryan and Janine Johnson; four great-grandchildren, Jasmine, JaNalise, Makeda and Dennis James; devoted nephew and his wife, James and Amelia Johnson; cousin Virginia Taylor and numerous other relatives and friends.

Funeral services were held on Tuesday, May 28, at the First Baptist Church in Yellow Springs. Interment followed at Dayton National Cemetery.