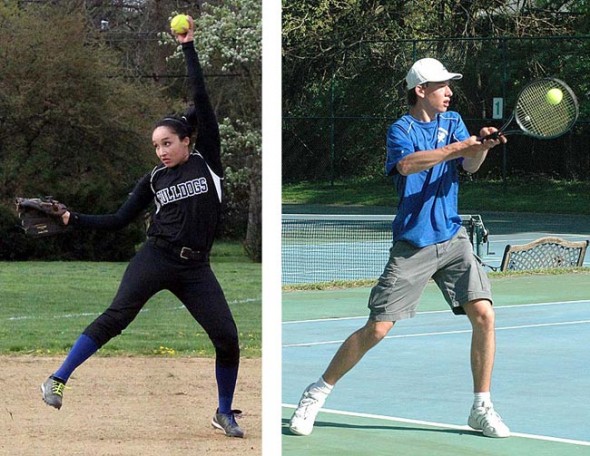 The first win by a YSHS softball team in five years was emphatic. The team started out with a nine-run first inning, then exploded for eight more runs in the fourth inning to pull away for a 23–11 run rule victory over a Troy Christian softball team that started the day in second place in the conference. It was their first win of the season.

“This team has been knocking on the door all season,” Coach Jimmy DeLong said. “All their hard work finally produced results as their hitting, fielding and defense all came together today. I knew we could win, but I was not expecting a win by run rule.”

Junior lefty Sierra Lawrence, who is second in the Metro Buckeye Conference in strikeouts, pitched a complete game three hitter with five strikeouts to get the win for the Lady Bulldogs. She finished strong to secure the victory, only giving up one run over the last three innings as the YSHS offense put up 10 runs.

The game started out as a slugfest on both sides as YSHS held a 13–10 lead after two innings. Several players contributed to the win on offense. Sophomore Modjeska Chavez was 4 for 4 with three runs scored and four RBIs. Lead-off hitter Jesi Worsham had four hits, three runs scored, and three stolen bases. Catcher Hannah Brown was on base twice with a hit and a walk and had three RBIs. The big hits of the day were made by junior Rachele Orme and Lawrence. Orme had three hits, scored two runs, and cleared the bases when she blasted a triple to deep right center field. Lawrence had the long hit of the day when she launched a long fly ball well over the left fielders head for a triple. The ball would have been a home run if the park had fences.

After beating Troy Christian, the Bulldogs hosted Middletown Christian. The team continued their offensive onslaught as they scored 14 runs, but it wasn’t enough as they lost by a score of 24–14. In that game, Orme circled the bases with a home run when she blasted a 300-foot shot to deep right-center field. The team record is 1–6.

Baseball gets first W in 3 years

The YSHS baseball team won its first game since 2010 with a 10–0 pounding of Meadowdale last week. Ethan Dewine struck out 10 batters and pitched a complete game shutout.

Teammate Chase Barclay was on the bench providing the team with all the inspiration a young team could possibly ask for, according to Cooper.

Wins have been rare for YSHS sports teams this spring. But the girls track and field team got one against a strong Emmanuel Christian squad two weeks ago, running over the visitors 74–54 with just 12 players. Last week saw inspiring performances that shattered school records.

Senior Angela Allen won the discus with a record-breaking distance of 106´5˝.

Kennedy Harshaw replicated Allen’s win in the shot put, sending it 28´3˝. The duo of AnnDee Pettiford and Louresha Cheatom took the top two spots in the long jump. Pettiford won with a leap of 13´7˝. Freshman Cheatom leapt 12´7˝.

Last week the girls track team went on a marathon binge of record breaking. Competing against 26 other schools in their race at the Wayne Invitational, the amazing distance medley relay of Miller, Harshaw, Walkey and Brown smashed a Yellow Springs school record that had stood untouched since 1992. The foursome shattered the old record by 45 seconds while placing eighth overall in 13:29.99. Later that night Walkey placed fifth in the Rising Stars 3200-meter run in a new personal best time of 12:51.27. Miller set a new school record in the 3200-meter run in 11:52.59. At the Mechanicsburg Invitational, Allen broke the YSHS discus record for the third time this year, heaving the discus 107´9˝, more than a foot better than her old record.

At the Mechanicsburg Invitational with a skeleton squad, the YSHS boys track and field team finished in sixth place. The highlight of the meet was a third-place finish in the 400-meter relay (49.17) by the tandem of Cameron Henderson, Bryce White, Aaron Sherwood and Roland Newsome. The 800-meter relay team (Henderson, White, Eli Biggs and Ed Johnson) placed fourth in 1:39.5. White took sixth in the 200-meter dash in 25.7. Roland Newsome’s long jump of 16´ was good for sixth as well. Strong performances were turned in by David Butcher, Kalonji Cross, Devon Perry and Alex Strolger.

The girls shot put competition at last week’s McKinney tri-meet was the most dramatic competition she ever witnessed, according to McKinney throwing coach Isabelle Dierauer. Jasmine Davidson was leading after five throws before her teammate Amani Wagner took the lead when she catapulted the shot to 29´3˝ improving Davidson’s one-week old school record by a foot. Davidson countered a few minutes later with her last throw setting again a new school record with a mark of 30´5˝ and winning the competition. Overall, the Lady Bulldogs dominated the shot put as Danny Horton placed fourth with 25´4˝ and Yasmine Longshaw placed fifth with 23´6˝.

Earlier Kaliyah Fulton opened the meet with a new school record in the pole vault. She improved her own record from 6´6˝ by one inch to 6´7˝, winning the competition.