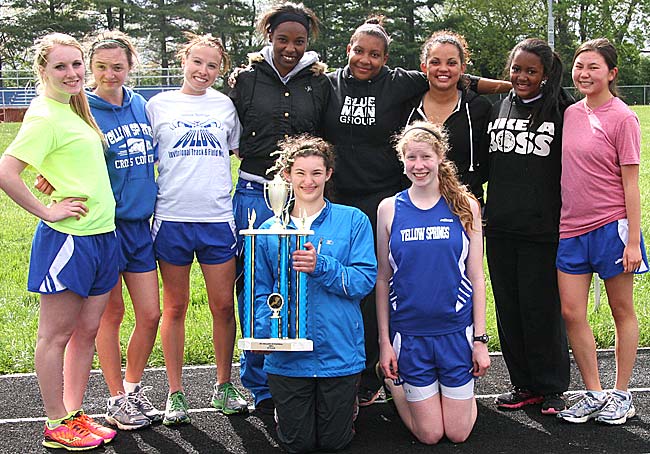 The 2013 YSHS girls track and field team shows off its first place trophy after winning the Bulldog Invitational earlier this month. Six of the team's athletes competed at regionals this week. (Submitted photo by Vince Peters)

Six athletes on the YSHS girls track and field team competed at the regional tournament this week. The top Lady Bulldog finisher was senior Alex Brown, who came in sixth place out of 14 runners in the 1600-meter run with a time of 5:31.12. Brown, who holds the school record in the 1600-meter and one-mile runs, improved on last week’s district run by one second. She will run on a scholarship at Wright State University in the fall.

Senior Lois Miller concluded her illustrious YSHS running career with a 12:33.68 showing in the 3200-meter run at regionals. Miller broke her own school record at last week’s districts with a run of 11:44.73. She qualified for states twice while at YSHS and is the fastest female cross-country runner in school history. Miller plans to study math and engineering and to run cross country, indoor track and outdoor track at DePauw University in Indiana.

Senior Angela Allen, in her third regional appearance, placed 13th in the discus competition with a toss of 94’07”. And the girls 4×800 relay team of Brown, Miller, Niki Worsham and Charlotte Walkey came in 11th place with a season-best run of 10:33.56. Junior Kennedy Harshaw heaved the shot put 30’1.25” at regionals after a third-place showing at districts last week.