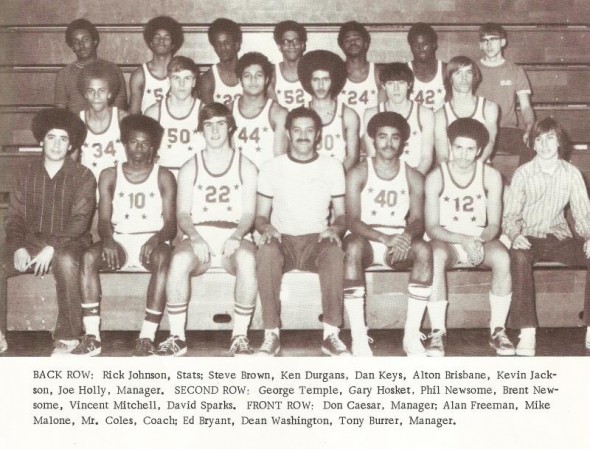 Charlie Coles, front tow and center, led the 1972 YSHS boys basketball team to a district title as its coach. Coles went on to win more games at Miami University than any other coach. He died last week.

Charlie Coles may be best known for his distinguished career as the winningest men’s basketball coach in Mid-American Conference history. But before his days at Miami University as a player and later, as a coach of 16 years, Coles set records at Bryan High School in Yellow Springs.

Coles, 71, died on Friday at his home in Oxford.

Born in Springfield, Coles played at Bryan High School in Yellow Springs in the late 1950s. He was the leading high school scorer in the state as a senior, averaging 42.1 points per game, according to the Ohio Basketball Hall of Fame. During that season he scored 40 or more 15 times and never had less than 23 in a game. He also holds the Yellow Springs record for most points in a single game, with 65. His jersey was retired at YSHS in 2000.

Coles went on to play at Miami University and later returned to coach boys basketball at Yellow Springs High School from 1969 to 1972. He delivered YSHS a district title, in 1972, with a 21–4 season.

At Miami Coles won three MAC championships as a coach. He retired last year with 263 wins at Miami, the most in school history.

Funeral services for Coles will be on June 13 at Millett Hall on the Miami University campus. Visitation hours are 9 a.m. to 12:30 p.m. and a service begins at 1 p.m. The Coles family is asking that donations be made to the American Heart Association or to the organization Coaches vs. Cancer.

Read the full story in the June 13 issue of the News.