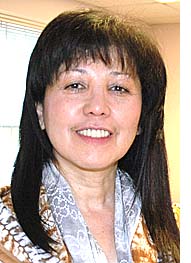 Dr. Rose Mary Shaw, who lives in the village, recently opened the Mindfully Well Center in Englewood, an integrative medicine practice with psychology, massage therapy, yoga and herbalism. The grand opening is on Saturday, June 22, and includes talks on ADHD, bullying, nutrition, Ayurveda and more. (Photo by Megan Bachman)

Few conventional medicine providers give much credence to traditional medicine, whose practitioners don’t often seek mainstream credentials. Dr. Rose Mary Shaw bridges both worlds. The Yellow Springs resident with a doctorate in neuropsychology has studied Ayurveda with David Frawley and nutrition with Andrew Weil. And she brings it all together in a new Englewood practice, the Mindfully Well Center, where Shaw, a clinical psychologist, is complemented by a massage therapist, a yogi and an herbalist.

Shaw’s blend of Western conventional practices with Eastern alternative therapies, also called integrative medicine, has at its core the practice of mindfulness, or “inner medicine.” And for Shaw, that blending culminated two decades of rigorous academic training and practice in so-called allopathic or conventional medicine as well as traditional therapies.

“I sought to learn as much the allopathic medicine as I could so I could have the strong science background to then bring in traditional medicines,” said Shaw, who worked at the former Wright State University clinic in Yellow Springs. “I understand the need for both — which is what integrative medicine is about.”

From 10 a.m. to 8 p.m. on Saturday, June 22, the Mindfully Well Center will host a free public grand opening with presentations, demonstrations and hands-on activities, aimed at young families. The president of the Ohio Psychological Association will speak on bullying, a Cleveland Clinic dietician will offer advice on healthy eating on a budget and a social worker/clown will tie in humor with wellness. There are also talks on water quality, Ayurveda, gardening for health, pranic healing — a no-touch healing modality — and dealing with children who have attention deficit hyperactivity disorder (ADHD).

The event also marks the beginning of a “90 for 90” free screening program for ADHD, and for depression and anxiety in children. The first 90 families to set up an appointment in the next 90 days with the Mindfully Well Center will get a free early screening. The program is for children in grades two through 12. To arrange a free consultation, call 937-832-1765.

Psychologists are well positioned to treat the whole person by exploring the connections between mind and body, Shaw said. In her practice, she emphasizes “lifestyle management” rather than medications, while referring patients to other complementary therapies.

“We need to get away from just giving pills,” Shaw said. “We have to stop just handing them a piece of paper saying change your diet and do some exercise. What I want to do here is to have a place to teach people self-care.”

Using cognitive behavioral therapy, Shaw also addresses insomnia and obesity in her clients as well as a host of other mental and physical illnesses. She seeks to prevent serious illness, and promotes longevity through proper nutrition, exercise habits and stress-reduction techniques. Encouraging mindfulness in her clients is paramount to prevention, she said.

“If we can begin to recognize the symptoms of stage one and two of a disease, we can prevent a whole barrage of invasive treatments,” Shaw said.

Lichtenfels, who has studied yoga for the last 30 years, will teach her brand of gentle, slow flow yoga at the center twice each week. The classes are good for beginners and include traditional yoga postures, breathing techniques and meditation to promote healing and relaxation, she said.

King will be the center’s herbalist, having spent the last 15 years studying herbs with Rosemary Gladstar, known as the “godmother of American herbalism,” and Ayurveda with Maya Tiwari, a spiritual teacher. King worked for the last 26 years at FedEx before quitting this spring to learn about herbs so she can naturally treat herself and others.

“I wanted to be able to grow my own food, make my own medicine and be my own doctor,” King said. “And I want to help other people empower themselves to say the drug and herb isn’t the first thing to reach for, it’s the last thing. The inner medicine is what’s first.”

Starting in the mid-90s, Shaw began her studies of Native American, Egyptian and Indian healing traditions. As part of the local Better Health Co-op, which was started by Billie Eastman, Shaw brought Ayurvedic healer Dr. Sunil Joshi to the village for presentations and health consultations. Shaw also took Joshi to meet doctors at local hospitals, but the medical establishment here was resistant to incorporating his methods, she said. So Shaw went back to school to get her doctorate with the goal of marrying traditional and conventional medicine.

After getting her degree at Wright State in neuropsychology — the study of the physical brain as it relates to psychological processes — and completing an internship and residency at the Cleveland VA Medical Center and Indiana University, Shaw returned to Yellow Springs to work at the Wright State Physicians medical clinic. Shaw and clinic director Dr. Cynthia Olson organized the first Wellness Day at the clinic in 2008 with free mental and physical health screenings. When the clinic was closed in 2009, Shaw’s local experiment with integrative medicine was halted, and though she hoped to bring the model back in Yellow Springs, she instead moved her practice to Englewood because of a lack of a suitable space in the village, she said.

Today, the model of care at the Mindfully Well Center is largely based upon Ayurveda, which is one of the oldest systems of natural medicine on the planet, Shaw said.

“Ayurveda is about being in touch with nature and its cycles,” Shaw said.

The first Wellness Day, at the Wright State clinic in 2008, was aimed at the geriatric population. This time, Shaw hopes to reach families with young children, she said.

“If every household would have someone trained in integrative medicine then families will begin to heal themselves and we can get some control of our health crisis,” Shaw said.

Visit the center’s website at http://www.tlc-ac.com or email Shaw at tlc.consult@att.net for more information.