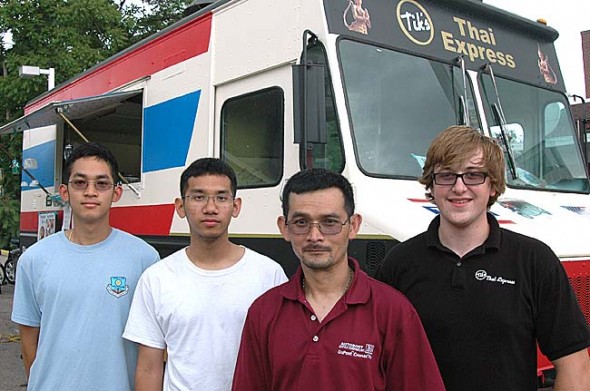 Tik Sripol sends the men in her family out on the road to vend the spring rolls and curry from her Tik’s Thai Express restaurants in the region. Her husband, Gita, center, his sons Peter, left, and Steven, far left, and their friend Sam Foskuhl have recently brought the food truck to the village and plan to return here most weekends throughout the summer. (Photo by Lauren Heaton)

Though he has been in the U.S. off and on since he was 12, Gita Sripol has come a long way from his birthplace in northern Thailand to sell the food of his homeland on the streets of Yellow Springs. But he and his wife, Siriya, nicknamed Tik, believe there is definitely a place for Thai flavors in the American diet, and they’ve bet three restaurants and a mobile vendor on it catching on all over the Miami Valley. The food cart, Tik’s Thai Express, has introduced itself to the village at the Village BP this spring and the results are positive. They plan to return throughout the summer.

The fried spring rolls, pad Thai, sweet rice and Thai iced tea are all a little sweeter than most Thais are used to eating. But after more than 10 years in the business, the family has learned how most diners in the Miami Valley like it.

So if you like your Thai food less sweet and more spicy, you have to ask for your red curry tofu or your massaman curry made Thai style. And if the fresh spring rolls, mango salad and Thai honey chicken aren’t what you’re craving, you can ask for a bowl of tom yum lemongrass soup or a plate of green curry, and you just might get it.

The food is close, but not exactly the same as what Gita grew up eating in Udorn, Thailand, where he was raised by an adopted family in the 1960s. Udorn is home to the Royal Thai Air Force Base, where his adopted mother met a U.S. military officer who later brought them both to Ohio when Gita was 12. Gita returned several times to Thailand, where on one particular trip his mother took him aside and pointed to the woman he was going to marry.

“I don’t have time to choose — that’s your wife,” Gita recalled.

It turned out his new wife, Tik, was quite a cook. At first the couple ran a stall called Yummy Burger at the Webster Street Market in Dayton. Gita worked as an auto mechanic and helped Tik with the business on the side. Then the couple opened House of Thai in Beavercreek, and five years ago settled their operation in Fairborn as Tik’s Thai Express. Soon they opened Tik’s Thai Grille in Bellbrook and Tik’s Thai Grille II in Springboro. And last year they sent their food truck on the road.

With so many restaurants, the Sripols don’t have time to man the truck alone. So most days they turn the operation over to their college-age sons, Peter and Steven, along with their friend Sam Foskuhl, who can be seen handing out packages of steaming hot noodles from the truck. But Gita’s trust in his sons goes only so far — he reserves sole responsibility for driving the truck on and off the lot each day.

“I still don’t trust,” he said, eyeing his sons.

Tik’s Thai Express plans to be in Yellow Springs most weekends, either at the Village BP or the Yellow Springs Brewery, from around noon until 8 p.m. They also plan to attend some of the Dayton Food Truck Rallies this summer. To find out where they are, check out Tik’sthaimobile on Facebook or call 789-6001.