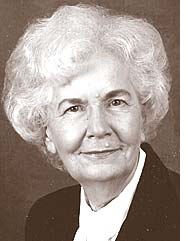 Ruth was preceded in death by her husband, Stanley Aschbacher, in 1986. She is survived by her nieces and nephews and sons of Serge Vernet and Lindsey Stellwagen: Colin, Braden and Cade. Friends and family will gather on Saturday, June 22, from 10:30 to 11 a.m. at the St. Paul Catholic Church, followed by a Mass of Christian Burial at 11 a.m. at the church. The burial will be in Resthaven Memorial Cemetery in Louisville, Ky.

Memorial contributions in Ruth’s memory to the Sister Visitor Center, 2235 West Market St., Louisville, KY 40212. Condolences may be expressed to the family at http://www.littletonandrue.com.