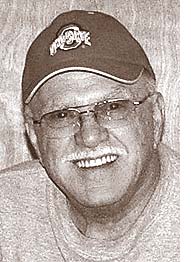 Jack Bittner of Yellow Springs passed away Friday, June 28, at The Hospice of Dayton.

Jack worked at International Harvester and Morris Bean and retired from Vernay Laboratories in 1989 after 31 years of service. After retiring, he held many small jobs with Erb Lumber and the Village of Yellow Springs and managed Ye Olde Trail Tavern.

He enjoyed fishing, landscaping, reading, collecting and following the Shawnee Braves, Wittenberg Tigers, Buckeyes, Reds and Browns. He loved spending time with family along with friends from the Wayside and Yellow Springs.

Jack’s family wishes to thank the staff of Dr. Mark Collins and the staff of The Hospice of Dayton for their outstanding care and support.

A memorial service was held at the United Methodist Church in Yellow Springs on June 30 at 4 p.m.

In lieu of flowers, donations may be made to The Hospice of Dayton in memory of Jack.