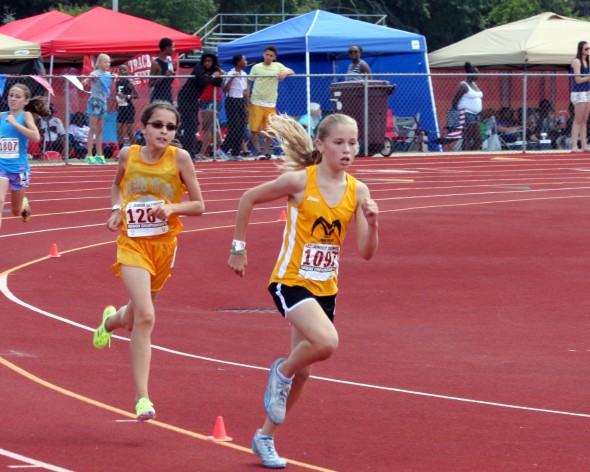 Twenty-seven athletes from the Miami Valley Track Club participated in a total of 54 events at the 2013 Region V Junior Olympics Meet at Oliviet College in Oliviet, Michigan, last weekend. Our club’s athletes performed so well, many of them achieving life time bests, that 26 of them qualified
to the Junior Olympic Nationals in Greensboro, NC, next week. The top five finishers in each event advance.

The National Junior Olympic Track & Field Championships, hosted by NC A&T University, begin on Monday, July 22nd, and conclude on Sunday, July 28th. Over 6,000 youngsters from all 50 states are expected to compete in this year’s championships.

Among the club’s athletes advancing are Yellow Springs sophomore Charlotte Walkey in the 15-16 girls race walk and Cameron Haught in the 15-16 boys race walk. Haught won the men’s race with a 61 second personal best. Walkey was second in the women’s race behind teammate Emily Belovich following a 30 second PB. Dani Worsham another Yellow Springs 9th grader, knocked two minutes off of her previous best time, to place third and give the local club a sweep of the top three spots in that event. Niki Worsham, recently graduated from YS HS took the top spot in the 17-18 girls division.

Several athletes qualified in three events including Ben and Taylor Ewert. Ben, a 9th grader, was a triple winner, achieving life time bests in the 1500m run, the 3,000m run and the 2000m steeplechase. Sister Taylor, had the toughest double of the weekend as she claimed titles in two races conducted back to back. She literately walked from her victory in the 1,500m race walk to the start of the 3,000m run. A big last lap kick gave her victory in that event in 11:36 – a time most
HS girls would envy. The younger Ewert would add a second place finish in the 1500m run.

Sarah Swisher, and 8th grader, also qualified in three events, the shot put, discus and javelin. She achieved life time best in all three, including a 38’2″ heave in the shot put.